Family 14 CBMs are modules composed of approximately 70 residues. These modules have been reported to be associated with chitinases [1] and as chitin-binding lectins or lectin-like proteins e.g. effector proteins from the tomato pathogens Pseudoercospora fuligena or Cladosporium fulvum [2, 3], as an antimicrobial lectin-like protein (tachycitin) from horseshoe crab hemocytes [4] and in peritrophic matrix proteins from the malaria vector Anopheles gambia [5]. Members of CBM14 have been shown to bind chitin [5, 6, 7] and chitooligomers [3, 8]; binding to 50 % acetylated hyaluronan has also been demonstrated [8]. 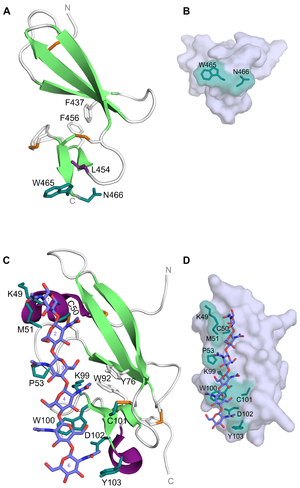 First Identified
CBM14 was first identified as an antimicrobial lectin-like protein with chitin-binding ability in the hemocyte of horseshoe crab (Tachypleus tridentatus) and called tachycitin [4].
First Structural Characterization
The first three-dimensional structure was determined by NMR spectroscopy for the CBM14 module tachycitin (PDB ID: 1DQC) [9]. The structure of the first carbohydrate-active enzyme associated CBM14 was determined by X-ray crystallography for the CBM14 of human chitotriosidase (PDB ID: 5HBF) [1].