The vast majority of family 2 CBM (CBM2) memebers, ~95%, are bacterial in origin. These protein modules have been shown to bind to crystalline cellulose [1], insoluble chitin [2] or xylan [3]. The xylan-specific CBM2 moduless bind only to the hemicellulose, while some cellulose-binding modules also recognize chitin. The CBM2 modules from some chitinases show a strong preference for crystalline chitin [2]. Cellulose-specific CBM2vmembers were also shown to bind to xyloglucan, albeit with affinities ~1000x lower than for crystalline cellulose [4]. Extremely weak binding to cellulooligosaccharides was detected in cellulose binding CBM2s using NMR [5]. In contrast affinities of xylan binding CBM2s for their polysaccharide or oligosaccharide ligands with a degree of polymerization of six were similar [6].

Some enzymes contain multiple CBM2 modules that, with respect to xylan, show enhanced affinity through avidity effects [5]. Isothermal titration calorimetry showed that CBM2 modules that interact with their target cellulose or xylan ligands were mediated by entropic [7] and enthalpic [5] forces, respectively. These differences in thermodynamic forces driving ligand recognition was proposed to reflect the conformational freedom of cellulose and xylan in free solution and when bound to CBMs. Family 2 is thus highly unusual, containing both cellulose binding type A and xylan binding type B CBMs. Labelling of type A crystalline cellulose specific CBMs, including those in CBM2, which all present three aromatic planar surface residues, showed differences in specificity for pure forms of crystalline cellulose and plant cell walls [8, 9]. 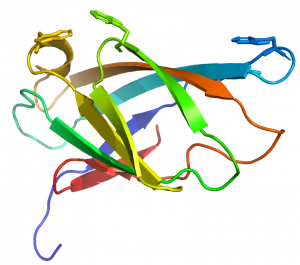 Figure 1. The fold of the CBM2 in the Cellulomonas fimi GH10 xylanase Xyn10A (also known as Cex)(see PDB ID 1exg) highlighting the three planar tryptophans that are optimised to bind to the planar surface of crystalline cellulose bound. 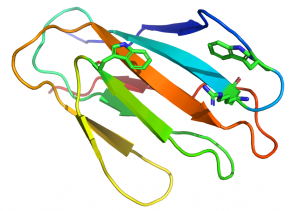 Figure 2. The fold of the CBM2 in the Cellulomonas fimi GH11 xylanase Xyn11D (PDB ID 2xbd) highlighting the two perpendicular tryptophans that are optimised to bind to xylose units n and n+2 in the three-fold helical structure of xylan. The tryptophan perpendicular to the surface of the CBM is mediated through a stacking interaction with a surface arginine, which is also shown.

CBM2 modules generally comprise 90 to 100 residues that adopt a canonical β-jelly-roll fold (see PDB ID 1exg for an example) [10]. The two β-sheets of these CBMs consist of four (face 1) and five (face 2) antiparallel β-strands, respectively. The structure is sometimes stabilized by a disulphide bridge between the N- and C-terminal regions, but not in all cases. In cellulose binding CBM2 members, face 1 presents a planar surface that contains three highly conserved aromatic residues (generally tryptophans although tyrosine can also be present) that are positioned to bind to glucose units in linear planar cellulose chains present in the crystalline polysaccharide (Figure 1). The corresponding aromatic residues interact with N-acetylglucosamine residues in chitin [2]. Mutagenesis and chemical modfication studies confirmed the critical role played by the aromatic residues in cellulose recognition [11, 12, 13]. The central tryptophan plays a more important role in ligand binding than the distal aromatic amino acids [12].

In xylan binding CBM2 modules (see PDB ID 2xbd for an example) face 1 displays a slightly concave surface that contains only two tryptophan residues [14]. The perpendicular orientation (with respect to each other; Figure 2) and location of these two tryptophan residues indicate that they interact with xylose residues n and n+2 in the three fold-helical structure of xylan chains. NMR titration experiments with xylooligosaccharides and mutagenesis studies showed that both aromatic residues play a critical role in xylan recognition.

An arginine residue adjacent to one of the tryptophans in the xylan binding CBM2 forces it into the perpendicular orientation with respect to the other surface aromatic residue (Figure 2). In cellulose binding CBM2s the corresponding perpendicular tryptophan (in xylan binding CBM2s) is planar with the other two surface aromatic residues (see PDB ID 1e5b). The adoption of the planar orientation was predicted to be mediated by the replacement of the arginine (in xylan binding CBM2s) with glycine in cellulose specific CBM2s. This was supported by mutagenesis studies showing that substituting the arginine with glycine in a xylan binding CBM2 created a planar orientation for both surface tryptophans (see Fig. 5 and 6 in [15]), abrogated xylan binding and introduced cellulose recognition [15]. Mutagenesis studies showed that alanine substitution of polar residues predicted to interact with CBM2 ligands did not influence affinity for xylan or cellulose, demonstrating that hydrophobic forces dominated carbohydrate recognition [12, 16].

CBM2 modules that target cellulose as the principle ligand have been reported in cellulases [1], xylan degrading enzymes (xylanases, arabinofuranosidases, esterases) [17, 18], pectate lyases [19], mannanases [20] and lytic polysaccharide monooxygenases (LPMOs) [21, 22]. Xylan and chitin binding CBM2s are restricted to enzymes that target these polysaccharides [2, 3]. Many of these modular enzymes contain other CBM families in addition to CBM2 members [23], with CBM10-CBM2 modular motifs being particularly common in glycoside hydrolases from Cellvibrio japonicus [24] (e.g. [25]) and Saccharophagus degradans [26]. CBM2s are linked to catalytic modules by linker sequences that are required to be >15 residues in length to maximize the boost in activity provided by the CBM [27, 28].

CBM2 modules substantially potentiate the activity of cellulases and chitinsaes against purified insoluble or crystalline forms of cellulose and chitin, respectively [1, 2]. It has been proposed that cellulase-derived CBM2s enhance enzyme activity by increasing the local concentration or proximity of the enzyme in the vicinity of the substrate [5]. It has, however, also been reported that a CBM2 was able to disrupt the structure of crystalline cellulose leading to enhanced enzyme activity [29]. Cell wall imaging studies have also shown that cellulose and xylan binding CBM2s enhance the activity of a pectate lyase, arabinofuranosidase and xylanases against plant cell walls [30]. Although CBM2s can bind irreversibly to crystalline cellulose [31], fluorescent bleaching experiments showed that these protein modules can migrate across the surface of the polysaccharide [32]. CBM2 protein modules have been explored as both affinity tags for purifying proteins and in the immobilization of industrially relevant enzymes to insoluble matrices [31, 33]. These modules are also deployed in the exploration of the architecture of plant cell walls [34].

First Identified
A CBM2 module was first discovered in the cellulase CenA and the xylanase CexA from Cellulomonas fimi. These modules were identified through treatment of these enzymes with proteinases, which resulted in the loss of the C-terminal region comprising the CBM2 module, which reduced binding to cellulose and, in the case of CenA, activity against crystalline forms of the polysaccharide [1]. In the early literature CBM2 modules were referred to as cellulose binding domains or CBDs.
First structural characterization
The first 3D structure of a cellulose binding CBM2 module, which was determined by NMR, was the C. fimi xylanase Cex [10]. The first structure of a xylan binding CBM2 member, also elucidated by NMR, was from the C. fimi xylanase Xyn11A [14]. The first crystal structure of a member of CBM2 was that of the chitin binding module from the Pyrococcus chitinase Chi18A (see PDB ID 2cwr) [2].