CBM4 is a bacterial family of protein modules that comprise around 150 amino acids. CBM4 modules target primarily xylans [1], β1,3-glucans [2] or β1,4-glucans [3], although they all display a degree of non-specific binding to other glycans. For example CBM4 members that primarily target xylan or β1,4-glucan also bind to β1,3-β1,4-mixed linked glucans. CBM4s that target predominantly β1,3-glucans also recognise β1,6-glucans [4]. It should also be emphasised that the CBM4s that preferentially target β1,4-glucans interact with amorphous cellulose but do not bind to crystalline cellulose [5]. 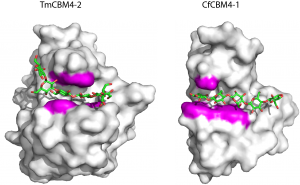 CBM4 members are located in a variety of xylanases and endo-acting glucanases that target β1,3, mixed linked β1,3-β1,4 or β1,4 linkages. In general the specificity of CBM4s are consistent with the substrate specificity of the enzyme, although the four CBM4 modules in a GH16 laminarinase from Clostridium thermocellum (CtLic16A) bound to a wide range of glycans, many of which share little structural similarities [15]. An interesting example of this functional relationship between enzyme activity and the specificity of the CBM module is found in a GH16 laminarinase that displays activity against β1,3-glucan (3G) and mixed linked β1,3-β1,4 glucan (34G), consistent with the preference of the N-terminal CBM4 species for 3G and the C-terminal CBM4 module for 34G [4]. The only evidence of increased affinity of CBM4 members through avidity effects is in CtLic16A [15].

Using phage display of random mutant libraries a range of specificities have been introduced into the RmCBM4-2 scaffold [16]. In addition to generating variants with increased specificity for xylan [17], mutants of the CBM4 module were produced that bound specifically to xyloglucan [18, 19] and even the protein component of immunoglobulins [20]. The engineered RmCBM4-2 variants have been used to probe plant cell wall architectures [21, 22].