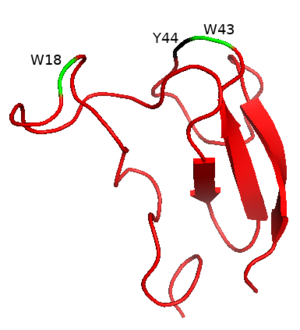 Figure 1. CBM5 of an endoglucanase from Erwinia chrysanthemi showing surface exposed aromatic residues; Trp18, Trp43 and Tyr44.
CBM5 modules possess surface exposed aromatic residues which interact with polysaccharides most probably through hydrophobic interactions [1, 9]. These aromatic residues form a flat platform to bind to the planar surfaces of crystalline cellulose/chitin. CBM5 are thus classified under Type A CBMs [10] . The EcEGZCBM5 possesses three exposed aromatic residues Trp18, Trp43 and Tyr44 (Figure 1). Trp18 is present on an extra loop and is linearly aligned to Trp43 and Tyr44 and extends the substrate binding site [5]. The three residues are essential for complete binding of EcEGZCBM5. Polar residues like Asp17 are present on cellulose binding face and form H-bonds to stabilize the appropriate orientation of cellulose binding residues[5]. Polar residues also form H-bonds with oxygen atom and/or OH-groups of glucose subunits of cellulose, thus have been proposed to play a role in cellulose-disruption [5]. Mutation of Asp17 resulted in decreased binding towards cellulose [9].