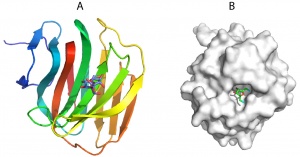 The vast majority of CBM66s are located in GH32 enzymes that target fructans. Based on this observation it was suggested that the predominant role of CBM66 is in binding fructans. The remaining CBM66 members are linked to a range of CAZy enzymes, primarily glycoside hydrolases and lyases, associated with plant cell-wall degradation, although the binding properties of these modules are unknown [1]. Biochemical analysis revealed that SacC displayed ∼100-fold-higher activity for levan (β-2,6–glycosidic linkages) compared with inulin (β-2,1–glycosidic linkages) or oligosaccharides [with a degree of polymerization (DP) <6] of either fructan. Truncation experiments showed that this elevated activity against levan was conferred by BsCBM66 [1]. Fusion of BsCBM66 onto a non-specific fructosidase caused a 100-fold increase in the activity of the enzyme against levan but did not influence the activity of the glycoside hydrolase against oligosaccharides or inulin [1]. It was argued that increased activity against levan reflects its highly branched structure compared to inulin; levan consists of multiple non-reducing fructose residues, similar to glycogen and amylopectin. Thus, the BsCBM66 and the GH32 catalytic module within SacC would be able to bind to different non-reducing terminal terminal fructose residues of the same polysaccharide molecule. It was proposed that the ensuing avidity effect resulted in much tighter binding of SacC to levan, compared to the catalytic module as a discrete entity, leading to increased catalytic activity. It was proposed that the avidity, and thus increase in substrate binding of the levanase, may be greater in the many GH32 enzymes that contain two or more CBM66 modules. It was also suggested that the proposed avidity mechanism for BsCBM66 function may be a generic feature of CBMs that bind to the terminal residues of glycans and are linked to exo-acting glycanases. Examples cited include GH84 exo-GlcNAcases, which often contain CBM32s that target terminal Gal-GlcNAc structures present on the surface of red blood cells [3].