The family CBM81 was first described on September 12, 2016 [1]. According to CAZy, other members were found exclusively in gammaproteobacteria [2]. The founding CBM81 (named CBM_E1) was identified from a sugar cane soil metagenome library [3], as part of a GH5 endoglucanase, where the catalytic module and the CBM are connected by a 32 amino acids (serine-rich) linker. The CBM_E1 interaction with soluble ligands was determined by Isothermal Titration Calorimetry, resulting in the highest affinity with barley β-glucan (KA of 1.4 x 10-4 M-1), followed by cellohexaose (1.2 x 10-4 M-1), xyloglucan (0.5 x 10-4 M-1) and cellopentaose (0.4 x 10-4 M-1). The protein did not show any affinity for xylan and oligosaccharides such as cellotetraose, mannohexaose, and xylohexaose. The thermodynamic parameters indicated that the CBM_E1 binding to ligands is enthalpically driven, which is a typical characteristic of type B CBMs [4]. On the other hand, based on pull-down assays with insoluble carbohydrates, the CBM_E1 was able to bind to Avicel, but not to Bacterial Microcrystalline Cellulose (BMCC), which is characteristic of type A CBMs. The Avicel is composed of about 40% of amorphous regions [5], these disordered regions of the polysaccharide are the probable CBM_E1 binding region. 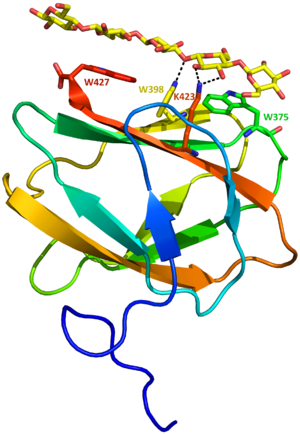 Figure 1. Cartoon structure representation of CBM_E1 complexed with cellopentaose (PDB ID 5KLE), the first member of family CBM81. CBM_E1 presents a beta sandwich fold with a flat binding site composed of three tryptophans and one lysine. The ligand is coordinated by CH-pi interactions with W375 and W427, and hydrogen bonds with W398 and K423. The N-terminal and C-terminal regions are coloured in blue and red, respectively.

Two structures of CBM81 are deposited in the Protein Data Bank so far. Both from CBM_E1, in the absence (PDB ID 5KLC) and presence of cellopentaose (PDB ID 5KLE) [1]. The structures were solved independent of the catalytic module. CBM_E1 is composed of a beta sandwich with four and five beta-strands connected by loops (Figure 1). Parallel to the beta-strands, three tryptophan are exposed to solvent forming a planar surface, which coordinates ligand binding. No differences were observed between apo and ligand complexed structures.

The CBM81 is the first CBM family to exhibit mixed characteristics from type A and type B CBM binding sites. type A CBMs bind to the surface of crystalline polysaccharides (such as cellulose and chitin) through CH-pi interactions between the surface aromatic residues and the monosaccharide units [6]. Although the planar surface of this CBM81 member is composed of aromatic residues, similar to type A CBMs, in the crystal structure of the complex one of the tryptophans has the indole ring perpendicular to the oligosaccharide chain, leading to a hydrogen bond instead of a hydrophobic interaction. This observation explains the enthalpically driven binding between the CBM and the ligand. In conclusion, CBM_E1 is classified as type B, due to its affinity for soluble glycan chains instead of crystalline polysaccharides, but presents the type A flat binding-site.

The CBM_E1 was demonstrated to bind amorphous regions of cellulose, as well as beta-glucan, xyloglucan and cello-oligosaccharides. All these ligands are typical substrates of endoglucanases, which are the enzymes linked to the CBM81 members so far deposited in CAZy. The CBM81 may enhance endoglucanase activity by bringing the enzyme module into proximity of the substrate [7]; however, this effect has not been experimentally demonstrated for this family.

First Identified
The CBM81 CBM_E1 was identified as part of a GH5 endoglucanase, originating from an uncultured microorganism (metagenomics) [1].

First Structural Characterization
The first crystal structures of the family CBM81 were from CBM_E1, in absence and presence of the ligand cellopentaose [1].