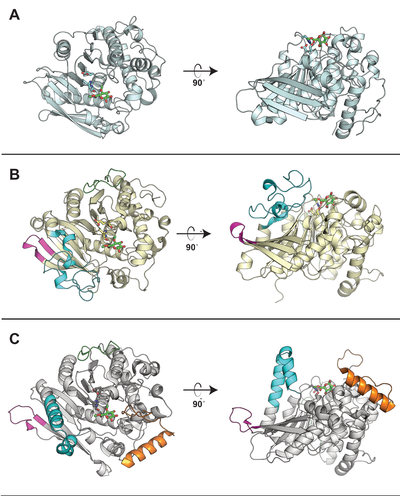 Figure 1. Comparison of structurally determined CE15 members. The CE15s (A) StGE2 from Thermothelomyces thermophila (PDB ID 4G4J), (B) OtCE15A from Opitutus terrae (PDB ID 6GS0), and (C) TtCE15A from Teredinibacter turnerae (PDB ID 6HSW) are shown in cartoon representation. The catalytic triad in each enzyme is shown as sticks and the methyl ester of 4-O-methyl glucuronoate first observed in StGE2 is shown in all structures as green sticks. While all CE15 members contain the alpha/beta hydrolase fold, the most prominent difference across the CE15 family observed to-date are the presence, absence, or variety of inserted regions that protrude and build-up ridges around the active site (the differently colored regions in the OtCE15A and TtCE15A). The extent to which these regions affect the enzyme’s substrate specificity has yet to be fully elucidated.

All CE15 enzymes characterized to-date are glucuronoyl esterases, cleaving esters of D-glucuronic acid. The first reported glucuronoyl esterase was ScGE1 from the white-rot fungus Schizophyllum commune, and the activity was demonstrated by TLC on a methyl ester of 4-O-methyl-D-glucuronic acid [1]. While CE15 members are found in both fungal and bacterial species, several bacterial CE15 enzymes are more promiscuous than their fungal counterparts and are active also on esters of galacturonoate [2]. Feruloyl- and acetyl esterase activities have been reported for certain CE15 enzymes as side activities [3, 4]. The proposed physiological role of CE15 enzymes is to hydrolyze lignin-carbohydrate ester linkages between lignin and glucuronoxylan in plant cell walls, and a few studies have demonstrated their activity on lignocellulose-derived materials and plant biomass [4, 5, 6].

All CE15 enzymes are serine-type hydrolases, containing a catalytic triad of Glu/Asp-His-Ser [2, 7, 8, 9]. The position of the acidic residue of the triad is not similarly positioned in all CE15 members as the residue can be found on different loops of the conserved fold [9]. A conserved arginine found in all of the CE15 structures, proximal to the catalytic triad, has been proposed to stabilize the formation of the oxyanion during catalysis [2].

First 3-D structure
The first solved structure of a CE15 enzyme was the Cip2 catalytic domain from Trichoderma reesei (TrGE) [7].
First mechanistic insight
The crystal structure of StGE2 (from Sporotrichum thermophile) in complex with the ligand 4-O-methyl-beta-D-glucopyranuronate gave the first direct insight into substrate binding [8].