Glycoside hydrolase family 101 currently contains proteins from bacterial species, most of which are commensal human bacteria, though some may also be human pathogens. The substrates are glycoproteins which contain the disaccharide Gal-beta-1,3-GalNAc-alpha-R also know as the Core 1 O-linked glycans on proteins. This glycosylation is a feature of mucin proteins. This enzyme activity was first observed in Clostridium perfringens [1] and then in Streptococcus pnuemoniae [2]. At present the known enzymes will not digest longer oligosaccharides, and variable amounts of activity have been seen on Core 2 and 3 type linkages [3].

A retaining mechanism was determined by 1H-NMR with the BlGH101 enzyme [4]. A detailed kinetic study has been performed with the SpGH101 by Willis and co-workers and the catalytic residues have been determined [5].

Using the enzyme from Streptococcus pneumoniae the catalytic nucleophile was determined as residue D764. Willis et al. [5] The general acid/base residue in SpGH101 was determined to be E796. 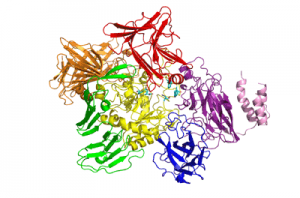 The recently solved 3D structure of SpGH101 reveals that this protein surprisingly shares some structural features with GH13 alpha-amylases, as well as containing potential carbohydrate binding modules. In the analysis of the 3D structure of SpGH101 the catalytic domain is a highly distorted (beta/alpha)8 barrel. This barrel is flanked by a domain of all beta-sheet structure which is very analogous to the arrangement seen in GH13 alpha-amylase [6]. The BlGH101 enzyme was found to have an almost identical fold, although this structure was solved at higher resolution (2A) than that of the SpGH101 (2.9A) [7]

This was determined with the BlGH101 enzyme using the 1H-NMR technique with the synthetic substrate Gal-beta-1,3-GalNAc-p-nitrophenol [4].

This was proposed based on the structure of the SpGH101 and BlGH101 structures, and then experimentally shown in SpGH101 by Willis and co-workers [5].

experimentally shown in SpGH101 by Willis and co-workers [5]

Determined for SpGH101 by Caines and co-workers [6]