GH12 enzymes are retaining enzymes, as first shown by NMR studies [4] on endoglucanase 3 from Humicola insolens. They are believed to follow a classical Koshland double-displacement mechanism in which a glycosyl-enzyme intermediate is formed and subsequently this intermediate is hydrolysed via an oxocarbenium-ion transition state. 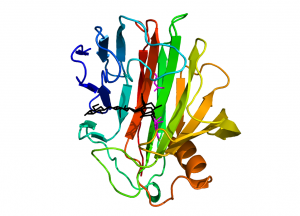 Figure 1: Streptomyces lividans CelB2 in complex with a 2-deoxy-2-fluorocellotrioside (PDB 2NLR). Two distinct species were modelled in the structure: the glycosyl-enzyme intermediate with the mechanism-based inhibitor covalently linked to the nucleophile Glu120, and the hydrolysis product, 2-deoxy-2-fluorocellotriose. Colour coding: CelB2 in rainbow colour-ramping from the N-terminus in blue to the C-terminus in red; catalytic residues in magenta; bound oligosaccharide in black

Enzymes from family GH12 adopt a “jelly-roll” fold with two twisted, mostly antiparallel β-sheets stacking on top of each other and enclosing a long substrate-binding groove located on the concave face of the sheet (Fig. 1). A single α-helix packs against the convex surface of the outer β-sheet. GH12 members of bacterial origin feature an additional two-stranded β-sheet, stabilized by a disulfide bridge, located at the rim of the substrate binding groove and providing an additional substrate binding platform as compared to the eukaryotic counterparts.

The first structures for family GH12 were that of Streptomyces lividans CelB2 in the apo-form [8] and in the form of a glycosyl-enzyme intermediate [10]. These structures confirmed previous predictions, based on hydrophobic cluster analysis [6], that GH12 enzymes would display significant structural similarity with family GH11 xylanases and gave rise to the creation of clan GH-C, which so far comprises only these two families. The first structure of a fungal GH12 enzyme was determined shortly thereafter, for Trichoderma reesei (formerly Hypocrea jecorina) Cel12A [11]. To date structural models, both in the apo-form and in complex with oligosaccharides, are available for sixteen family members.

The substrate-binding grooves of family GH12 enzymes harbour six binding sites, from -4 to +2, lined by numerous aromatic residues providing binding platforms for the individual pyranose units. This is consistent with the endoglucanase activity of these enzymes, exhibiting low catalytic efficiency towards short chain substrates [12]. The catalytic nucleophile Glu120 (S. lividans CelB2 numbering) and the general acid/base Glu203 are in close proximity of an invariant aspartate, which might have an important role in catalysis. This catalytic triad is reminiscent of the catalytic centre of family GH7 enzymes. GH12 family members, like those of family GH7, have the acid/base residue situated 'syn' to the pyranoside 0-5-C-1 bond, and are thus classified as syn-protonators. 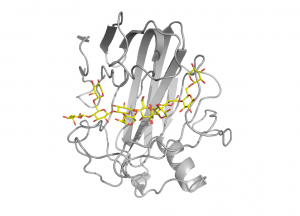 Figure 2: Xyloglucanase XG12 from Bacillus licheniformis in complex with xyloglucan (PDB 2JEN). α-1,6-xylose substitutions are present at subsites -3, -2, +1 and +2.

Structural and function studies of several xyloglucan-specific enzymes of the family, including xyloglucanase XG12 from Bacillus licheniformis [13] and the xyloglucan specific endo-β-1,4-glucanase XEG1 from Aspergillus aculeatus KSM 50 [14], have shown that α-1,6-xylose substitutions can be tolerated at subsites -3, -2, +1 and +2 (Fig. 2). Certain GH12 enzymes exhibit β-1,3-1,4-glucanase activity and the crystal structure of Humicola grisea Cel12A in complex with a mixed linkage oligosaccharide arising from a transglycosylation reaction revealed that the β-1,3-linkage can be accommodated between subsites -3 and -2 [15]. It has been speculated that a long loop crossing the substrate-binding groove at its reducing end, known as the “cord” and conserved in all clan GH-C members, might undergo conformational changes upon substrate binding [16], but the available GH12 complex structures support the view that the role of this loop is to deliver residues for substrate binding.

The crystal structure of Aspergillus aculeatus XEG1 in complex with the glycoside hydrolase inhibitory protein (GHIP) from carrot, EDGP, reveals a mode of inhibition distinct from that observed previously for the inhibition of a family GH11 xylanase by a wheat protein [17]. In the XEG1-GHIP complex the inhibitor mimics a xyloglucan substrate and inserts two conserved arginine residues into the active site, which establish salt bridges with the carboxylate groups of the catalytic centre (Fig. 3) [14]). 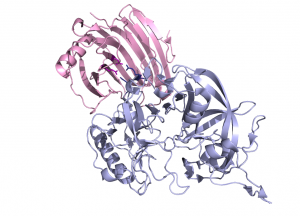 Figure 3: Inhibition of Aspergillus aculeatus XEG1 by the glycoside hydrolase inhibitory protein from carrot. EDGP (PDB 3VLB). Two conserved arginine residues of the inhibitor make salt bridges with the catalytic residues of XEG1. Colour coding: XEG1 in pink with carboxylate groups of the catalytic centre in purple; EDGP in lightblue with the conserved arginine residues in deepblue.

Due to commercial interest in their bioprocessing applications, GH12 endo-β-1,4-glucanases from Humicola grisea [18], Trichoderma reesei [18, 19], Rhodothermus marinus [20], Pyrococcus furiosus [21] and Thermotoga maritima [22] have been extensively engineered and the structural studies of the resulting variants have provided valuable insight into structural features governing enzyme activity and stability.