The first GH128 enzyme, GLU1, was cloned from Lentinula edodes fruiting bodies (shiitake mushroom) [1]. GLU1 cleaves β-1,3 linkages in various β-glucans such as lentinan from itfself, laminarin from Laminaria digitata, pachyman from Poria cocos, and curdlan from Alcaligenes faecalis but does not degrade β-1,3-linkages within β-1,3-1,4-glucans such as barley glucan, indicating the enzyme is categorized into EC 3.2.1.39 [1]. A further work with several GH128 members corroborated that this family is specific for β-1,3-glucans [2]. In addition, it was showed that bacterial members are endo-β-1,3-glucanases that degrade these carbohydrates at higher rates, such as those from Amycolatopsis mediterranei (subgroup I) and Pseudomonas viridiflava (subgroup II) [2]. Fungal enzymes are more diverse in terms of activity: endo-β-1,3-glucanases, represented by the GLU1 from L. edodes (subgroup IV) [1, 2]; exo-β-1,3-glucanases that release trisaccharides (Aureobsidium namibiae) (subgroup VI) [2] and monosaccharides (Cryptococcus neoformans) (subgroup V) [2] from the reducing ends; and exo-β-1,3-glucanases that release trisaccharides from the non-reducing ends of triple-helical β-1,3-glucans, represented by the enzyme from Blastomyces gilchristii [2] (subgroup III). Some fungal members from this family are devoid of catalytic activity but conserve the capacity to bind short β-1,3-glucooligosaccharides (subgroup VII) such as those from Trichoderma gamsii [2] and C. neoformans [2].

As predicted by the first study of a GH128 enzyme [1], this family is part of the Clan GH-A and its members are retaining enzymes, which operate by a classical Koshland retention mechanism as confirmed through 1H-nuclear magnetic resonance spectroscopy with the retention of the anomeric configuration of enzymatic products [2].

From the sequence alignment of GH128 members, two glutamic acids, E103 and E195 in L. edodes GLU1, were predicted to be the catalytic residues [1]. They were further confirmed to be the acid/base and the nucleophile, respectively, by site-directed mutagenesis of the bacterial GH128 member from A. mediterranei [2]. These residues are located at the C-terminal ends of the strands β7 and β4 [2], as observed for other clan GH-A families.

A three-dimensional homology model of L. edodes GLU1 indicated similarity with several (β/α)8-barrel (TIM-barrel) structures, including a GH39 β-xylosidase and a GH5 β-mannanase [1]. The fold resembling an (β/α)8-barrel was further confirmed with the crystal structure determination of 9 members of the family [2]. However, in all structures, the helix α2 and the strand β3 are strictly absent [2]. Moreover, some enzymes such as the endo-β-1,3-glucanase from ‘‘L. edodes’’ (GLU1) and the exo-β-1,3-glucanase from C. neoformans, also lack the helices α1 and α3, respectively [2].

Two distinct modes of substrate binding were observed in the GH128 family [2]. The most widespread mode, named as hydrophobic knuckle, involves a tryptophan residue that interacts with four glucoside moieties from –5 to –2 and is fully complementary to the typically curved conformation of β-1,3-glucan chains. The other mode, only observed in fungal members belonging to subgroups IV and VI, requires substrate conformational changes to allow the binding to the catalytic interface. In these fungal subgroups, the hydrophobic knuckle is absent and two aromatic residues, positioned at the -5 and -4 subsites, create a linearized cleft, which requires a 180° torsion in the glycosidic bond between the glycosyl moieties –2 and –3 in the β-1,3-glucan chain for binding. This mode of substrate recognition is called as “flattening” mechanism due to the unusual conformational, but also stereochemically favorable, adopted by the substrate. It is notable that such mode of substrate binding was not yet observed in other CAZy families active on β-1,3-glucans. 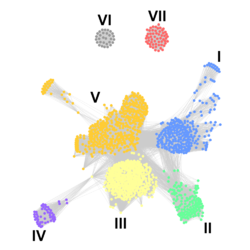 The glycoside hydrolase family 128 was created based on the study of Yuichi Sakamoto and colleagues [1]. Years later, the group headed by Mario Murakami carried out a task force to explore the functional and structural diversity of this family [2]. For this purpose, they employed phylogenetic and SSN analyses to segregate the family into putative isofunctional subgroups. The SSN analysis resulted in two well discretized clusters (subgroups VI and VII) and a third cluster that was further subdivided into five subgroups (I to V) based on SSN alignment scores and evolutionary closeness (Fig. 1). At least one member of each subgroup was biochemically and structurally characterized: AmGH128_I, PvGH128_II, ScGH128_II, BgGH128_III, LeGH128_IV, CnGH128_V, AnGH128_VI, TgGH128_VII and CnGH128_VII. Subgroups I and II were found to be predominantly present in bacteria, and the subgroups III to VII are mostly found in fungi. Bacterial enzymes are faster, present the hydrophobic knuckle and attack the β-1,3-glucan in an endo mode of action, which is compatible with their biological function: nutrition and competition. Fungal β-1,3-glucanases are known to act on remodeling of their own cell walls. Therefore, these enzymes are slower, more diverse in terms of substrate recognition modes (flattening mechanism – subgroups IV and VI; hydrophobic knuckle – subgroups III, V and VII) and mode of action (exo-enzymes – subgroups III, V and VI; endo-enzymes – subgroup IV; oligosaccharide binding proteins – subgroup VII). This was the first time that a glycoside hydrolase family was rationally studied based on SSN analysis. A recent study led by Prof. Harry Brumer applied a similar strategy to classify the polyspecific GH16 family into isofunctional subgroups using the available functional and structural data in the literature [3], highlighting this approach as a promising strategy to systematically assess the functional and structural diversity of CAZyme families. It is noteworthy to point out that Brumer´s group made available an intuitive and robust program to perform SSN analyses, named as SSNpipe that is freely available from GitHub (https://github.com/ahvdk/SSNpipe).

First stereochemistry determination
predicted to be retaining by membership in Clan GH-A [1] and further validated by 1H-NMR of products of the A. mediterranei endo-β-1,3-glucanase (AmGH128_I) [2].