Glycoside hydrolases of family 141 (CAZy) display α-L-fucosidase (EC 3.2.1.51) [1] or xylanase (EC 3.2.1.8) [2]activities. The Bacteroides thetaiotaomicron enzyme BT1002 was the founding member of this family. The enzyme cleaves the fucosodic linkage in 2-O-methyl-D-xylose-α-1,3-L-fucose-α1,4-L-Rhap, a component of Chain B of rhamnogalacturonan II, a complex pectin conserved in the primary cell walls [1]. Recently, an endo-xylanase from Clostridium thermocellum (Xyn141E) was also described. Xyn141E is active against a range of xylans, displaying lowl elvel side activity against other β1,4-glycans such as carboxymethyl cellulose, barley beta glucan and mannan from ivory nut [2].

Very little is known about the kinetics or mechanism of GH141 enzymes. However, in the BT1002 crystal structure, the distance of 6.1 Å between the catalytic residues suggests that members of this family may be retaining enzymes and follow a double displacement mechanism [1].

In the BT1002 crystal structure, two aspartates (Asp523 and Asp564), which are highly conserved and located within the active site pocket, are the proposed catalytic residues. Site directed mutagenesis of these amino acids abolished the catalytic activity of BT1002 indicating the essential role in catalysis. Additionally, the structural location of the catalytic residues suggests that Asp523 (at the base of the pocket) acts as catalytic nucleophile and Asp564 (at the lip of the active site) is the general acid-base residue [1]. 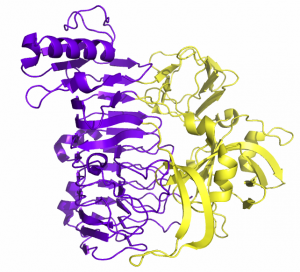 The three-dimensional structure has been solved for B. thetaiotaomicron BT1002 at 2 Å (PDB ID 5PDB). The protein has two domains: a N-terminal β-sandwich and a C-terminal catalytic domain that folds into a right-handed parallel β-helix . The overall fold displays similarity to members of polysaccharide lyase family 1 (PL1) and glycoside hydrolase family 28 (GH28). (Figure 1) [1]. The active site pocket is in a similar location to the catalytic centre of GH120 β-xylosidases [3]. The catalytic resisdues identified in the GH120 β-xylosidase, however, are not conserved in the Gh141 α-L-fucosidase talytic residues identified in a GH120 in are not conserved in