GH70 enzymes are transglucosylases produced by lactic acid bacteria from, e.g., Streptococcus, Leuconostoc, Weisella or Lactobacillus genera. Together with the families GH13 and GH77 enzymes, they form the clan GH-H.

Most of the enzymes classified in this family use sucrose as the D-glucopyranosyl donor to synthesize α-D-glucans of high molecular mass (>106 Da) with the concomitant release of D-fructose (Fig. 1). They are also referred to as glucosyltransferases (GTF) or glucansucrases (GS) [1, 2, 3, 4]. The first glucansucrase was isolated from sucrose-broth cultures of a strain of Ln. mesenteroides [5, 6]. The enzyme was shown to synthesize water-soluble dextran (α-1,6 linked D-glucan) from sucrose alone. Dextran from Ln. mesenteroides sp. was the first microbial polysaccharide to be commercialized and used for pharmaceutical and fine chemical applications. The glucansucrases produced by Streptococcus sp. were extensively studied on account of their major role in the formation of dental caries [1, 2].

Depending on their specificity, glucansucrases catalyze the formation of linear as well as branched α-D-glucan chains with various types of glycosidic linkages, namely α-1,2; α-1,3; α-1,4; and/or α-1,6 [1, 4, 7]. They are classified by the Nomenclature Committee of the International Union of Biochemistry and Molecular Biology (NC-IUBMB) on the basis of the reaction catalyzed and the specificity:

A wide range of α-D-glucans, varying in size, structure, degree of branching and spatial arrangements can thus be produced by GH70 family members [1, 2, 3, 4].

Sucrose analogues such as α-D-glucopyranosyl fluoride, p-nitrophenyl α-D-glucopyranoside, α-D-glucopyranosyl α-L-sorofuranoside and lactulosucrose have also been reported as D-glucopyranosyl donors [8, 9, 10]. GH70 glucansucrases also transfer the D-glucosyl units from sucrose onto hydroxyl acceptor groups. A large variety of acceptors may be recognized by glucansucrases including carbohydrates, alcohols, polyols or flavonoids to yield oligosaccharides or gluco-conjugates [2, 3, 4, 11, 12, 13, 14]. The structure of the resultant glucosylated product is dependent upon the enzyme specificity.

Glucansucrases also catalyze glucosyl exchange between their glucan products in "disproportionation" reactions [15]. Of note, some members of GH70 produced by Lb. reuteri sp. were also reported to be able to use maltooligosaccharides as the glucosyl donor and to catalyze transfer to maltooligosaccharide acceptors via the formation of α-1,6 linkages, thus acting as 4,6-α-glucanotransferases, which suggested additional evolutionary relations between families GH70 and GH13 [16, 17].

One glucansucrase was shown to possess two catalytically-active domains acting in tandem [18]. This enzyme was shown to be secreted by Ln. mesenteroides NRRLB-1299 (reclassified as Ln. citreum). These domains work cooperatively to synthesize dextran with more than 20% α-1,2 branched linkages and are both classified in GH70. One domain is responsible for the synthesis of the α-1,6 linked dextran chain, whereas the second one is specific for the catalysis of α-1,2 branch formation. The truncated form of this enzyme carrying only the second catalytic domain was named α-1,2 branching sucrase as it does not catalyse sucrose polymerization and shows transglucosylase activity only in the presence of sucrose and linear α-1,6 dextran [19].

Enzymes from GH70 belong to the same clan, GH-H, as GH13 and GH77 enzymes. All employ a retaining mechanism, in which the transfer of the glucosyl unit proceeds through the formation of a β-glucosyl ester of an aspartate side chain, which was first isolated by sequencing peptides provided by rapid quenching of enzymic reactions with labeled sucrose and extracellular glucosyltransferases from S. sobrinus [20, 21]. Once the β-glucosyl-enzyme intermediate is formed, the glucosyl units originating from sucrose may be transferred onto either water (hydrolysis reaction), D-fructose released from sucrose cleavage (sucrose isomer formation) or onto the growing glucan chain (main reaction) [20, 21, 22, 23]. When acceptors are introduced into the reaction mixture, acceptor glucosylation occurs at the expense of polymer formation, and the competition between the two reactions is controlled by acceptor recognition by the enzyme [11]. Polymer extension proceeds from the non-reducing end [22] and involves a single active site as observed in the tertiary structures of GH70 enzymes [23, 24].

The catalytic domain of family 70 enzymes is often flanked at the N- and/or C-termini by sequences containing a series of homologous repeating units that confer glucan binding ability [2, 3, 25]. They are found in domain V (Fig. 2) and have also been shown to influence polymer size, enzyme activity, specificity and processivity [2, 3, 22]. However, their precise role at the molecular level is still not fully understood [23, 24].

Sequence analysis, secondary structure prediction and tertiary structure comparison with enzymes from GH13 enabled the localization of a putative catalytic triad that is strictly conserved in GH70 and similar to that found in GH13 [23, 24]. This triad is formed by an aspartate (catalytic nucleophile) corresponding to the residue identified by peptide sequencing [20, 21], a glutamate (general acid/base catalysts) and a second aspartic acid that is critical for transition state stabilization [23, 24]. The putative role of these residues in catalysis was further supported by mutations and structural analyses [2, 3, 4]. 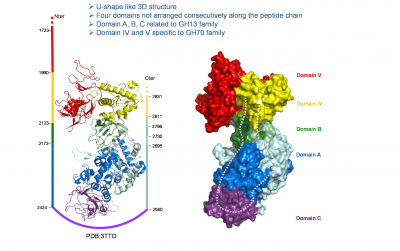 Fig. 2. Structure scheme of a GH70 glucansucrase (by David Daude)

The 3-D structures of GTF180-DN dextransucrase from Lb. reuteri 180 [23], GTF-SI from S. mutans [24] and α-1,2 branching sucrase (engineered from DSR-E dextransucrase from Ln. citreum NRRL B-1299) [19], all revealed a unique fold organized as five distinct domains (Fig. 2), named C, A, B, IV and V, and made up of peptide segments that are not consecutively arranged along the peptide chain. The catalytic domain of GH70 glucansucrases consists of a (β/α)8 barrel resembling that of GH13 enzymes but formed by sequences that have undergone circular permutation compared with the GH13 domains [23, 26]. The 3-D structures of complexes with sucrose, maltose and acarbose enabled the mapping of the active site and the identification of some determinants of GH70 enzyme product specificity.

First stereochemistry determination
The retaining stereochemistry was inferred upon discovery of the enzyme from Ln. mesenteroides catalyzing dextran synthesis from sucrose by Hehre [5].
First amino acid sequences
Those of GTF-B from S. mutans and GTF-I from S. sobrinus Mfe28 simultaneously reported in two companion articles [27, 28].
First catalytic nucleophile identification
Identified first in S. sobrinus glucansucrase [20, 21].
First general acid/base residue identification
Assigned on the basis of sequence alignments and secondary structure [26]. Assigned on the basis of 3-D-structure [23, 29].
First 3-D structure
The first 3-D structure for GH70 members was that of the GTF180-DN dextransucrase from Lb. reuteri [23, 29].