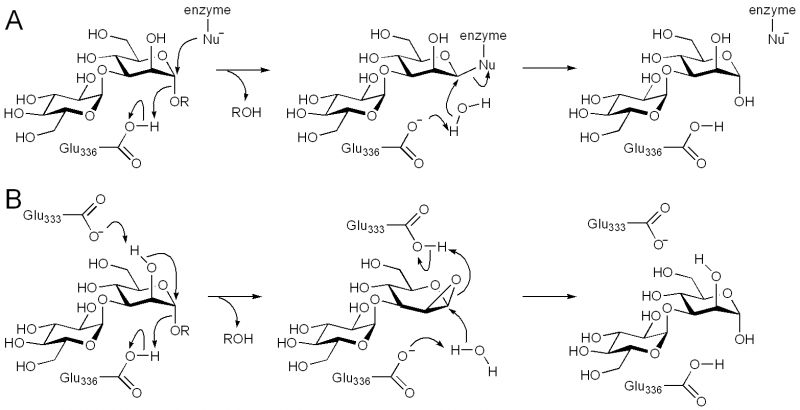 Three-dimensional structures are available for human MANEA [12], and bacterial members of GH99, including B. thetaiotaomicron and B. xylanisolvens [10]. They have a classical (β/α)8 TIM barrel fold, which is distinguished by the presence of extended loop motifs that form the active site. In different structures of the bacterial enzymes, these loops adopt different conformations, and appear to play a role in recognizing the extended structure of the N-glycan substrate. Binary complexes with two inhibitors, α-glucosyl-1,3-deoxymannonojirimycin and α-glucosyl-1,3-isofagomine, and 'active-site-spanning' ternary complexes with the same two inhibitors and the reducing end product fragment 1,2-α-mannobiose, provided insight into active site residues, especially the acid/base (Glu336 in BxGH99; Glu332 in BtGH99) and another key residue that interacts with both the 2OH of the -1 mannose residue and the 6OH of the -2 glucose residue, which provides a rationale for the requirement of a glucosylated-mannoside as the minimal substrate for GH99 enzymes [10]. As discussed in more detail in the "Kinetics and Mechanism" section, there is not nucleophilic residue within potential bonding distance to the anomeric centre, consistent with the neighboring group participation mechanism via an epoxide intermediate.

The catalytic domain of human MANEA and complexes with substrate-derived inhibitors were consistent with 3D structures of equivalent complexes with the Bacteroides enzymes. , which provide insight into dynamic loop movements that occur on substrate binding. MANEA contains a flexible '-2' loop (which is absent in bacterial enzymes), which interacts with the -2 sugar. In various structures of MANEA, with ad without ligands bound, the -2 loop was observed to adopt different conformations [12]. which was observed A GH99-like protein from the marine flavobacterium Ochrovirga pacifica, which lacks the conserved catalytic residues of glycoside hydrolase family 99 possessed a similar fold to other GH99 members. It is speculated that this protein may be noncatalytic and possibly involved in carbohydrate binding [13].