From CAZypedia
(Redirected from GH64)
Jump to: navigation, search

All characterized members of the GH64 family are laminaripentaose-producing β(1,3)-glucanases (EC 3.2.1.39) from the GH64-TLP (thaumatin-like protein) superfamily. They are found in bacteria and fungal species, and are particularly abundant in the genomes of various Streptomyces and Fusarium species. Activity has been shown on insoluble and soluble β-1,3-glucans, including curdlan [1, 2, 3], colloidal pachyman [1, 3, 4], laminarin [1, 3, 4], and zymosan A [1, 2], a commercial preparation of partially-purified yeast cell walls (contains branched glucans).

GH64 enzymes follow an inverting mechanism, first shown by 1H-NMR during the hydrolysis of laminarin [4], thus operating by a single-displacement mechanism.

The general acid and base for this family were first proposed in 2009, based on the active site topology and residue orientation observed in the first published structure in this family, of the LPHase from Streptoymces matensis [3]. Subsequent enzymological characterization of this enzyme by the same group confirmed the identity of the general acid (Glu154) and general base (Asp170), via site-directed mutagenesis, chemical rescue, and kinetic analysis [5]. 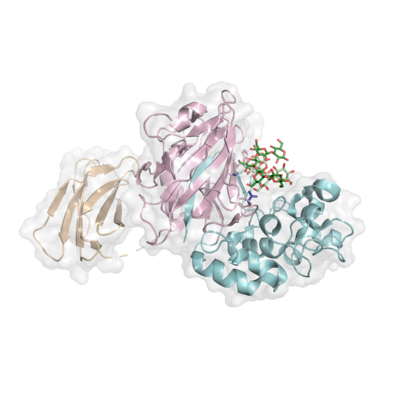 Figure 1. Structure of PbBgl64A in complex with two laminarihexaose chains (forest, pale green). (PDB ID 5H9Y) The barrel domain is shown in light pink, the α/β domain in light blue, and the CBM56 in wheat. The general acid (here, as E236A) and general base (D252) are shown as indigo sticks.

Each three-dimensional GH64 structure characterized to date shares a crescent-like fold comprising of a barrel domain, and a mixed α/β domain (Figure 1). This fold is unique among GHs; GH64s are not classified into any existing GH clans. In some instances, the GH64 may also contain a N-terminal CBM13 or CBM56, the latter of which has been shown to bind β-1,3-glucans [6].

The interface between the two domains forms a wide, electronegatively-charged groove, which contains the active site. Specifically, the proton donor and base are located in the center of this groove, on strands β7 and β9 of the barrel domain, approximately 7.5 Å apart. The laminaritetraose-bound structure of LPHase from Streptoymces matensis (PDB ID 3GD9) reveals that the barrel domain mediates most of the interactions between the sugar and the protein [3] (NB: In this case, LPHase was co-crystallized with laminaripentaose, however, density was only observed for four glycosyl residues). To date, no significant conformational changes have been noted between apo and complex structures.

The three-dimensional structure of the catalytically-inactive Blg64A from Paenibacillus barengoltzii, in complex with two laminarihexaose chains (PDB ID 5H9Y), provides the first structure-based evidence to explain how GH64s enzymes might bind to the triple-helical structure adopted by β-1,3-glucans in vivo [6] (Figure 1). In this structure, the 40 Å-long groove containing the active site is 15 Å wide, and thus accommodates the two twisted laminarihexaose chains. The surface of the groove is also sufficiently large to accommodate the triple helix of linear β-1,3-glucans such as curdlan, however, the β-1,6 branching typical of laminarin would be sterically hindered, explaining the lower activity of this enzyme on laminarin. To date, there is no experimental evidence to explain how the triple helix is hydrolyzed by GH64s.