From CAZypedia
(Redirected from GH81)
Jump to: navigation, search

GH81 members are endo-β(1,3)-glucanases (EC 3.2.1.39) with diverse physiological roles in, for example, plant biomass degradation, cell cycling, and pathogen defense. They are mostly found in bacteria and fungi, and are particularly abundant in Saccharomyces and Streptomyces species. Activity has been demonstrated on laminarin [1, 2, 3, 4, 5, 6], curdlan [1, 3, 5, 6], and pachyman [2, 5].

GH81 enzymes follow an inverting mechanism, as first shown by 1H-NMR during the hydrolysis of laminarin oligosaccharides [7], and laminarin [2], thus operating by a single-displacement mechanism.

Primary sequence alignments of GH81 members reveal a number of highly conserved residues, including two glutamate residues and one aspartate residue, which are located in the active site cleft and are likely to serve as catalytic residues [3, 4, 8].

Comprehensive mutagenesis experiments, azide rescue, structural analysis, and examination of the product conformational itinerary in ligand complexes show that one of the two glutamic acids (E542 in GH81 from Bacillus halodurans C-125) acts as the catalytic base by activating a catalytic water, and that the aspartic acid (D466 in BhGH81) acts as the catalytic acid [5, 8]. Mutagenesis studies in T. fusca indicate that mutation of the second glutamic acid (E546 in BhGH81) results in a dramatic reduction in activity [8]. Structural analysis of BhGH81 indicates that this residue is positioned during the catalytic cycle to interact with and stabilize a distorted product intermediate. The potential role of this residue as a base and in activating the catalytic water prior to substrate binding is presently unclear. 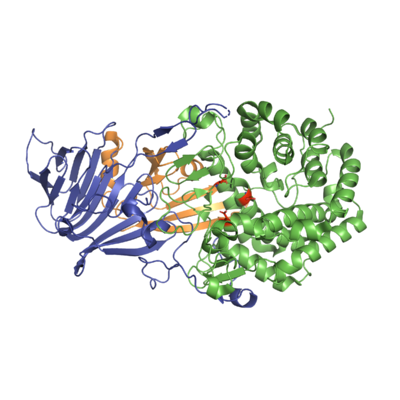 Figure 1. Structure of Lam81A from Rhizomucor meihei (PDB ID 4K3A). Domain A (blue) and Domain C (green) comprise the core of the enzyme, with domain B (orange) acting as a stabilizer. The proposed catalytic residues are shown as red sticks.

GH81 members are multimodular, although the composition of the domains can vary slightly. The first characterized structure, Lam81A from Rhizomucor miehei CAU432, comprises an N-terminal β-sandwich domain (domain A), a small α/β domain (domain B), and a C-terminal (α/α)6 domain (domain C) [4]. Domains A and C form the core of the enzyme, which is likely stabilized by domain B. (Figure 1). This architecture is largely conserved in the GH81 from Bacillus halodurans C-125 (BhGH81) [5], and the cellulosomal GH81 from Clostridium themocellum ATCC 27405 (CtLam81A) [6], however, the C-terminal domain is a CBM56 in BhGH81 and a cellulosomal dockerin in CtLam81A. 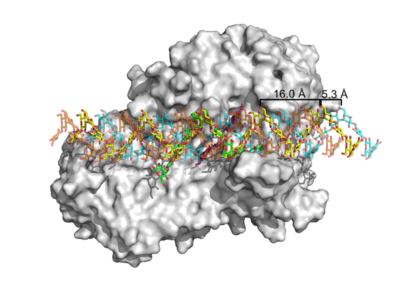 Figure 2. The structure of GH81 from Bacillus halodurans suggests that GH81 are capable of binding helical forms of β-glucan (PDB ID 5T4G). The triple helical structure of curdlan (beige, yellow, cyan) is shown, with the pitch (16Å) and spacing (5.3Å) between strands indicated. Figure from [5].

Spanning domains A and C is a large cleft (10Å deep, 10Å wide, 70Å long), in which the proposed catalytic residues are located. Co-crystallization of BhGH81 in complex with an extensive range of laminarin oligosaccharides provided structural evidence for the ability of this enzyme to generate a pool of oligosaccharide products [5]. Notably, these structures clearly define catalytic and ancillary binding subsites, and reveal the ability of this enzyme to simultaneously bind oligosaccharides in these sites. Thus, GH81 is likely to bind and cleave helical forms of β-1,3-glucans in an endo-processive manner [5] (Figure 2).

GH81 tertiary structures are unique among GHs, including other characterized endo-β(1,3)-glucanase families. As such, GH81 is not classified into any GH clan.