From CAZypedia
(Redirected from GH89)
Jump to navigation Jump to search

Family 89 glycoside hydrolases are α-N-acetylglucosaminidases [1, 2]. CpGH89, produced by the animal pathogen Clostridium perfringens, is active on the unusual α-D-GlcNAc-(1,4)-D-Galactose motif [3] displayed on the gastric mucosal class III mucins [4]. The human lysosomal enzyme, NAGLU, is involved in the degradation of heparan sulfate [5, 6]. Mutations in this enzyme can cause a devastating lysosomal storage disorder called Sanfilippo syndrome type B which is also called mucopolysaccharidosis IIIB (MPS IIIB) [5, 6]. 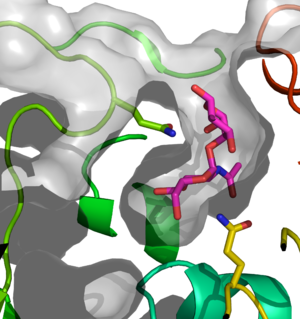 CpGH89 is a multi-modular protein and quite large (2095 amino acids) and contains six modules with sequence similarity to the family 32 carbohydrate-binding modules (CBM32s) [9]. To obtain the CpGH89 catalytic module structure, only residues 26-916 were crystallized [1]. The N-terminal domain (residues 26-155) forms a β-sandwich fold and is one of the CBM32-like domains. This module is tightly packed against the rest of the protein through a number of hydrophobic and hydrogen bonding interactions and is not predicted to be functional in carbohydrate-binding [9]. The catalytic region is comprised of a small mixed α/β domain (residues 170-280), a decorated (α/β)8 core (residues 280-620), and an all α-helical domain (residues 621-916) [1]. The active site is sock-shaped to accommodate the bend in the class III mucosal α-D-GlcNAc-(1,4)-D-Galactose motif caused by the alpha glycosidic linkage (Figure 1) [1, 7]. The mutations causing MPS IIIB were mapped onto the bacterial homologue, demonstrating that the mutations are mainly structural in nature [1].