From CAZypedia
(Redirected from PL2)
Jump to: navigation, search

PL2 activity has been demonstrated on α-(1,4)-linked polygalacturonic acid (i.e. homogalacturonan or pectate) and α-(1,4)-linked oligogalacturonides [1, 2]. There are two subfamilies in PL2 [3]. Subfamily 1 is correlated with endolytic activity, whereas subfamily 2 is correlated with exolytic activity. Intriguingly, the majority of sequence entries are from the genomes of phytopathogenic or enteropathogenic bacteria, and are found in paralogous copies within each species [4]. Several outliers exist, including the single copy PaePL2 from Paenibacillus sp.Y412MC10, which may reflect the ancestral endolytic activity [4].

Use of a β-elimination reaction to cleave the glycosidic bonds in pectate requires a Brønstead base for proton abstraction and a catalytic metal (e.g. Mn2+ or Mg2+) for acidification of the β-proton and oxyanion stabilization. PL2s have reported pH optimas in the range of 7.4 - 9.6 [1, 4], which is substantially lower than the pKa of arginine. These effects have been attributed to localized pKa effects within the active site. β-elimination results in the production of a new reducing end (residue in the -1 subsite) and a 4,5-unsaturated bond in the other nascent sugar chain end (residue in the +1 subsite). Full kinetics with a library of metals have been performed for the YePL2A and YePL2B [5]. Both paralogs have the best catalytic efficiency with Mn2+; however, the secreted YePL2A demonstrates more plasticity in metal utilization; whereas, the cytoplasmic YePL2B is selective for Mn2+.

The Brønstead base for the PL2 family is an arginine, which is consistent with most pectate lyase families. R171 in YePL2A was the first catalytic base described for the family and it is completely conserved within the family [1, 4]. The metal coordination pocket in YePL2A consists of two histidine residues (YePL2A: H109 and H172) and one glutamic acid (YePL2A: E130). 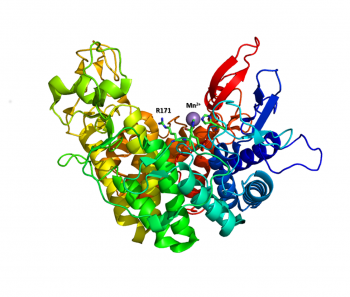 YePL2A in complex with Mn2+
The structure of the endolytic PL2A from Yersinia enterocolitica (YePL2A) was the first PL2 structure to be reported [1]. In this study, structural differences were noted between a native-form (PDB 2v8i, 1.50 Å), and complexes with trigalacturonate (PDB 2v8k, 2.1 Å) and a transition metal (PDB 2v8j, 2.01 Å). Family 2 PLs adopt a rare α/α7 barrel fold, with an active site cleft extending along the surface of the enzyme between two catalytic arms. Substrate binding induces a conformational change and the arms close about the substrate.