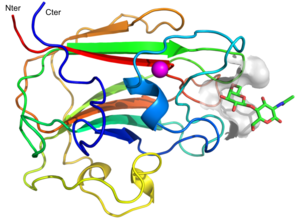 Figure 1. Structure of CBM71-1. Cartoon representation of CBM71-1 in complex with LacNAc (green sticks). Color ramped red to blue from N- to C-terminus. A bound calcium atom is shown in magenta.

The CBM family 71 was created in September 2014 with the characterization of the large multimodular β-galactosidase BgaA from Streptococcus pneumoniae [1]. Two CBMs, CBM71-1 (residues 1463-1645) and CBM71-2 (residues 1828-1998), were identified in the N-terminal region of this protein. The functional characterization of the CBMs reveals a binding specificity limited to lactose (galactopyranosyl-β-1,4-D-glucose) and LacNAc (galactopyranosyl-β-1,4-N-acetyl-D-glucosamine).

The structure of CBM71-1 solved by X-ray crystallography shows a β-sandwich fold comprising opposing sheets of 4- and 5-antiparallel β-strands and a bound structural metal ion modelled as a calcium (Figure 1). CBM71-1 structure in complex with LacNAc reveals a shallow binding site located at the apex of the β-fold opposite the N- and C-termini, making CBM71s type C CBM [2]. The basis of CBM71-1 specificity for sugars with a terminal galactose resides in the W1514 side chain configuration, which provides CH-pinteractions with both β-linked pyranose rings of the disaccharide (Figure 2). CBM71-2, which possesses 35% sequence identity with CBM71-1, presents a very similar fold and an almost identical binding site. 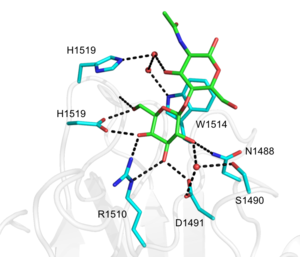 The CBM71s are found as ancillary modules in the β-galactosidase BgaA from S. pneumoniae. BgaA is a large multimodular cell surface exposed CAZyme comprising 17 modules of 7 different types. However, only the catalytic module belonging to the family 2 glycoside hydrolase [3] has been fully characterized along with the characterization of CBM71s [1]. In addition to their classical CBM role of focusing the enzyme to its substrate, the streptococcal CBM71s have been shown to contribute to pneumococcal adherence by binding lactose- and LacNAc-containing cell surface glycoconjugates [1].

The CBM71 modules were first identified through the characterization of the β-galactosidase BgaA from S. pneumoniae [1]. CBM71-1 and CBM71-2 are the founding, and only characterized, members of the family.

The first crystal structures of family CBM71s were from the streptococcal β-galactosidase BgaA [1]. The crystallographic structures of a seleno-methionine derivative of CBM71-1 (PDB ID 4CUA), CBM71-1 in complex with LacNAc (PDB ID 4CUB) and CBM71-2 (PDB ID 4CU9) were deposited in the Protein Data Bank in September 2014.