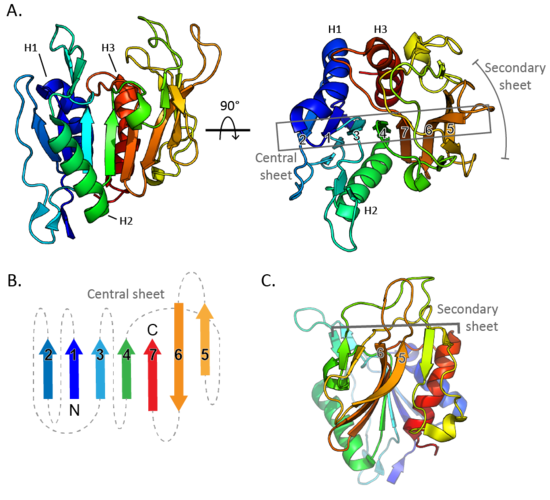 Figure 1. Agd3CBM87 from A. fumigatus adopts a Rossman-like fold. A. The structure of Agd3CBM87 (PDB 6NWZ) consists of three ⍺-helices (H1-H3) and a central β-sheet (indicated with a grey box and numbered from N-terminus to C-terminus). A secondary β-sheet (indicated with a grey line) involves the N-terminus of the sixth and C-terminus of the fifth β-strands of the central sheet. B. Cartoon representation of the central β-sheet showing the arrangement of strands. Numbering is based on location in the primary sequences from N-terminus to C-terminus. Other secondary structure elements are not shown. C. The side view of the structure with partial transparency reveals the secondary β-sheet. The strands from the central sheet are numbered. Structure images were created in PyMOL (The PyMOL Molecular Graphics System, Version 2.0 Schrödinger, LLC).

CBM87 members are roughly 220 residues in length and are found N-terminal to CE18 domains. The structure of A. fumigatus Agd3CBM87, was determined using X-ray crystallography to 2.6 Å resolution (PDB 6NWZ) [1]. The structure contains a Rossman-like fold (Figure 1A). The central β-sheet consists of seven strands, with the sixth stand running anti-parallel to the other stands (Figure 1B). The fifth and sixth strands rotate at one end to lie almost perpendicular to the primary central sheet and form the centre of a smaller secondary sheet (Figure 1C). The loops at the C-terminal end of the central β-sheet form a cleft that is predicted to be the location of GAG binding (Figure 2A). Surface exposed conserved aromatic residues (W292 and W344 in A. fumigatus Agd3) were found to contribute to GAG binding (Figure 2B). Binding studies of site directed alanine mutants of W292 and W344 had reduced affinity for GAG produced by A. fumigatus cultures, supporting this hypothesis [1]. The presence of an open binding cleft suggests that CBM87s can bind within a polysaccharide chain and thus may be Type B CBMs.

All CBM87 members, to date, are found N-terminal to CE18 domains (CAZy Database, Feb, 1 2021). The first characterized CE18, Agd3, was found to be important for exopolysaccharide processing and biofilm formation in the fungus A. fumigatus [3]. The structure of Agd3 revealed that the CBM87 domain extends the CE18 active site cleft (Figure 2C). When the CBM87 domain was removed from Agd3, the constructs could not be successfully expressed or purified suggesting that the CBM was required for stability of the catalytic domain [1]. Due to this, the levels of deacetylation activity could not be compared between the CE18 alone and in the presence of the CBM. Therefore, mutations were made in the CBM to disrupt predicted carbohydrate binding sites. Mutation of the conserved surface exposed aromatics, W292 or W344, to alanine led to decreased activity in a GAG deacetylation assay [1]. The CBM87 domain is proposed to contribute important substrate binding sites leading to increase substrate affinity. This was confirmed using mass spectrometry of synthesized hepta-saccharide substrates which revealed a decreased rate of primary deacetylation by the W344A variant. Wild-type Agd3 is capable of deacetylating GAG polymers on multiple subsites [1]. Whether other CBM87 members have similar roles in their cognate systems is still to be determined.