From CAZypedia
(Redirected from CBM28)
Jump to: navigation, search

This module was first classified in 2002 by a characterization study of the C-terminal module in GH5 Cel5A from Bacillus sp. 1139 (BspCBM28) [1]. All known CBM28s are so far derived from bacterial origins, mostly attached to cellulosomal endoglucanases in tandem with CBM17. They bind non-crystalline (or amorphous) part of cellulose, cellooligosaccharides, or β-1,3-1,4-glucans [1, 2]. 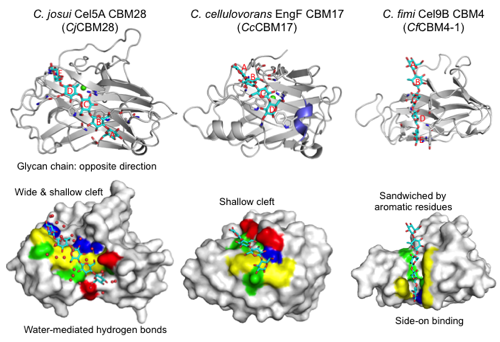 Figure 1: CBM28 (3aci) [3] in comparison with CBM17 (1j84) [4] and CBM4 (1gu3) [5]. Sugars of cellooligosaccharides (cellopentaose or cellotetraose) are designated as A-E from the non-reducing end to the reducing end. Ca2+ ions in CBM28 and CBM17 are shown as green spheres in the ribbon representations (upper). Important residues in the cleft are colored yellow (aromatic), red (acidic), blue (basic), and green (neutral) on the molecular surfaces (lower).

CBM28s have a β-sandwich fold (approximately 200 amino acids) that is similar to CBM17 and CBM4 (Figure 1). The module has a straight cleft that binds a cellulose glycan chain at the concave face of the β-sandwich fold. A Ca2+ ion is bound on the back side of molecule. The Ca2+ ion is not involved in ligand binding but appears to play a structural stabilization role. These modules are typical endo-type Type B CBMs that accommodate a single glycan chain in an open cleft. Figure 1 shows the cellopentaose complex structure (3aci) of CBM28 in GH5 Cel5A from Clostridium josui (CjCBM28). The long binding cleft runs at the center of the molecule. Therefore, the binding pocket location of CBM28 is on the concave face (side) of the β-sandwich fold, not within the variable loop region (CBM Fold). The shallow cleft of CBM28 binds one side of the cellooligosaccharides (face-on) in contrast with the case of CBM4 (side-on). There are at at least five subsites (A-E from the non-reducing end to the reducing end) in CjCBM28. Interestingly, the direction of the cellooligosaccharides bound to CBM28 is opposite to those in CBM17 and CBM4. Subsites B, C, and E form stacking interactions with aromatic residues (W78, W129, and F128 in CjCBM28). The flanking hydroxyl groups are extensively recognized by direct or water-mediated hydrogen bonds. Therefore, CBM28 has a relatively wide cleft.

CBM28s are thought to target catalytic modules (endoglucanases) to non-crystalline region of cellulose. Deletion mutants of CBM28 in Cel5A from Bacillus sp. 1139 showed significantly decreased amounts of the soluble products from amorphous cellulose [2]. They are exclusively associated with GH5 endo-β-1,4-glucanases and a survey using the GH-CBM tool shows that CBM28s are not associated with other GH family domains. As a typical endo-type (Type B) CBM, CBM28s show the Ka values of 0.7-5.2 ×104 M-1 for the binding of cellooligosaccharides (cellotetraose to cellohexaose), and it is enthalpically driven [1, 6]. BspCBM28 binds amorphous (regenerated) cellulose with high-affinity (Ka = 9.9 ×105 M-1) and low-affinity (Ka = 2.1 ×104 M-1) cites [2]. A novel application of CBM28 molecules was recently published where BspCBM28 was used as a marker to identify amorphous regions in cellulose in photoactivated localization microscopy (PALM) studies [7].

The first identified member is the C-terminal module in Cel5A from Bacillus sp. 1139 (BspCBM28) [1]