From CAZypedia
(Redirected from CBM66)
Jump to: navigation, search 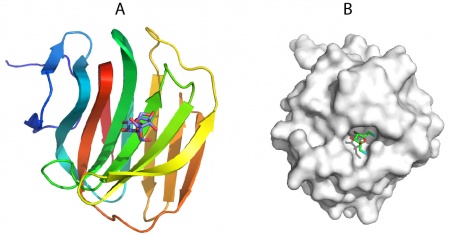 The crystal structure of the apo form of BsCBM66 showed that the protein adopts a β-sandwich fold in which the two β-sheets contain seven and six antiparallel β-strands, respectively (PDB ID AZZ). The surface of the protein reveals a broad pocket centered on the concave β-sheet (Figure 1A). In complex with fructose (PDB ID 4B1L) or levantriose (PDB ID 4B1M) the sugars were located in the broad pocket demonstrating that it comprises the ligand binding site. Fructose, which is in its furanose form, is sandwiched between two aromatic residues, which make non-polar interactions with the ligand. These hydrophobic contacts are augmented by polar interactions with a lysine, asparagine and two aspartates.

Mutagenesis showed that all the polar and aromatic residues are essential for the binding of the CBM66 to its ligands. The O1 and O6 of the bound fructose are pointing at the surface of BsCBM66 (Figure 1B), preventing extension of the ligand in the non-reducing direction (levan and inulin are linked β-2,6– and β-2,1, respectively), whereas O2 is pointing into solvent, consistent with the protein binding to the non-reducing fructose termini of β-2,6– and β-2,1–linked fructans. This confirms the designation of BsCBM66 as a type C CBM. The ligand-binding residues identified above are conserved in 37 CBM66 members, and thus it is likely that these protein modules display specificity for the non-reducing fructose termini of levan and inulin and bind through a common mechanism. In the complex with levantriose the non-reducing fructose makes the same interactions with BsCBM66 as fructose. The central and terminal fructose in the trisaccharide do not make biologically significant interactions with the protein.

The vast majority of CBM66s are located in GH32 enzymes that target fructans. Based on this observation it was suggested that the predominant role of CBM66 is in binding fructans. The remaining CBM66 members are linked to a range of CAZy enzymes, primarily glycoside hydrolases and lyases, associated with plant cell-wall degradation, although the binding properties of these modules are unknown [1]. Biochemical analysis revealed that SacC displayed ∼100-fold-higher activity for levan (β-2,6–glycosidic linkages) compared with inulin (β-2,1–glycosidic linkages) or oligosaccharides [with a degree of polymerization (DP) <6] of either fructan. Truncation experiments showed that this elevated activity against levan was conferred by BsCBM66 [1]. Fusion of BsCBM66 onto a non-specific fructosidase caused a 100-fold increase in the activity of the enzyme against levan but did not influence the activity of the glycoside hydrolase against oligosaccharides or inulin [1].

It was argued that increased activity of the CBM66-containing fructosidase against levan reflects its highly branched structure compared to inulin; levan consists of multiple non-reducing fructose residues, similar to glycogen and amylopectin. Thus, the BsCBM66 and the GH32 catalytic module within SacC would be able to bind to different non-reducing terminal terminal fructose residues of the same polysaccharide molecule. It was proposed that the ensuing avidity effect resulted in much tighter binding of SacC to levan, compared to the catalytic module as a discrete entity, leading to increased catalytic activity. It was proposed that the avidity, and thus increase in substrate binding of the levanase, may be greater in the many GH32 enzymes that contain two or more CBM66 modules. It was also suggested that the proposed avidity mechanism for BsCBM66 function may be a generic feature of CBMs that bind to the terminal residues of glycans and are linked to exo-acting glycanases. Examples cited include GH84 exo-GlcNAcases, which often contain CBM32s that target terminal Gal-GlcNAc structures present on the surface of red blood cells [3].

First Identified
BsCBM66 from the B. subtilis exo-levanase SacC was the first member of the family to be identified and characterized [1].
First Structural Characterization
The first structural characterization of a member of family CBM66 was BsCBM66 [1].