Functionally characterized CE3 members are all known to contain the classical catalytic triad of Ser-His-Asp, typical of the SGNH hydrolase family of enzymes (see Fig. 1) [2, 3]. The active site residues are presented via four conserved consensus sequences (Blocks I-III and V), and have an altered nucleophilic “elbow” turn motif (-GxSxT- as opposed to the canonical -GxSxG- motif) compared to other related members of the α/β-hydrolase family [4, 5]. The catalytic triad along with the Block II Gly and Block III Asn residues that comprise the oxyanion hole, are universally conserved across all characterized CE3 enzymes. The Block V Asp residue mediates the amphoteric nature of the Block V His residue, which abstracts a proton from the Block I Ser to render it nucleophilic. 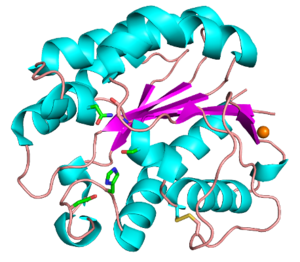 CE3 esterases catalyze the hydrolysis of O-linked acetyl groups from xylan oligo- and poly-saccharides. The Block V His residue abstracts a proton from the Block I Ser, rendering it nucleophilic, which attacks the electrophilic carbonyl carbon of the acetyl group of the xylan substrate; generating a tetrahedral oxyanion intermediate that is stabilized by the backbone amides of the Block I Ser and Block II Gly, as well as the sidechain amide of the Block III Asn, together forming the oxyanion hole in the active site [6]. Collapse of the oxyanion intermediate results in the formation of a transient acyl-enzyme intermediate and alcohol by-product [6]. A hydrolytic water molecule is then deprotonated by the Block V His residue, and attacks the acyl-enzyme intermediate; hydrolyzing the bond and releasing acetate and the free enzyme [6]. In the process, the Ser (Block I) is re-protonated and ready for another catalytic cycle.

The kinetics for two enzymes from the CE3 family have been studied. CtCes3-1 (PDB ID 2VPT) was found to have a kcat/KM of 2.5 and 1.2 mM-1s-1 for p-nitrophenyl acetate (pNP-Ac) and acetylated xylan, respectively [7]. In other studies, TcAE206 (PDB ID 5B5S) was not assayed against acetylated xylan, but the kcat/KM with pNP-Ac and p-nitrophenyl butyrate (pNP-B) were reported as 44.7 and 4.1 mM-1s-1, respectively, while no activity was detected with p‐nitrophenyl octanoate (pNP-O) as the substrate [8].

Two members of the CE3 family have been structurally resolved, TcAE206 from Talaromyces cellulolyticus (PDB ID 5B5S) (see Fig. 1) and CtCes3-1 from Hungateiclostridium thermocellum (formerly Clostridium thermocellum) (PDB ID 2VPT). Both structures adopt an (α/β/α)-sandwich fold typical of the SGNH hydrolase family. The (α/β/α)-sandwich contains five central parallel β-strands forming a curved β-sheet, which is flanked by 5-6 α-helices [6, 7]. Additionally, both structures contain a calcium binding loop motif (DXVGX7DXn(D/N)) located above the N-terminal end of the central β-strand (β2) [8]. This binding motif is conserved across all currently characterized CE3s. A coordinated zinc ion was also observed next to a calcium ion in a TcAE206_S10A variant (PDB ID 5B5L), however this was attributed to the use of ZnSO4 in the crystallization conditions [6]. Unique to TcAE206 is a disulfide bond formed near the N-terminus (see Fig. 1) that is thought to position the catalytic Ser by stabilizing neighbouring areas, including a β-turn (β1) that involves the catalytic Ser [6, 8].

First characterized
In 1994, the sequence of XynB from Ruminococcus flavefaciens 17 was found to be related to family G xylanases [9]. In 1997, BnaC from Neocallimastix patriciarum was found to have close relation to XynB and other enzymes known to be members of a diverse family of esterases [10]. It wasn’t until 2000 that CesA from R. flavefaciens 17, which was shown to have significant sequence identity to XynB, was characterized with the ability to deacetylate acetylated xylans; thereby representing the first characterized enzymes of family 3 CEs [11].
First mechanistic insight
In 2000, CesA, XynB, and BnaC were aligned and shown to contain what was thought to be a Ser-His-Asp catalytic triad responsible for the observed esterase activity [11]. This was later confirmed by the structural resolution of CtCes3-1 (PDB ID 2VPT) [7].
First 3-D structure
The first resolved structure was CtCes3-1 (PDB ID 2VPT) from Hungateiclostridium thermocellum (formerly Clostridium thermocellum), displaying the (α/β/α)-sandwich fold and Ser-His-Asp catalytic triad typical of SGNH hydrolases [7].