Carbohydrate Esterase Family 7 currently contains enzymes classified as acetyl xylan esterases (AXEs) and cephalosporin-C deacetylases [1]. One exception is the AXE from Thermotoga martitima that lacks detectable activity towards acetylated xylan, but rather, shorter acetylated xylo-oligomers [2]. A common feature of the oligomeric enzymes belonging to this family is that they usually serve as multifunctional deacetylases and are active on a broad range of small substrates with relatively low acetyl-positional specificity [2, 3, 4, 5]. Some examples include xylose tetraacetate, glucose pentaacetate, α-napthyl acetate, 4-methylumbelliferyl acetate and p-nitrophenyl acetate (pNP-acetate) [6]. Substrate binding is proposed to be largely mediated through non-specific hydrophobic interactions with surface amino acid residues [5].

Members of this family use the catalytic triad of serine, histidine and aspartate [7]. The aspartate promotes the amphoteric nature of the histidine residue so that it can abstract a proton from the serine residue to render the serine nucleophilic [2]. The Gly-X-Ser-X-Gly motif, containing the nucleophilic serine, is common amongst the broad α/β-hydrolase family to which the CE7 enzymes belong [8]. The glycine residues near the catalytic serine are important to prevent any steric hindrance that may occur from amino acids with larger side chains and form the basis for the nucleophilic “elbow” turn motif that is present in these enzymes [2]. 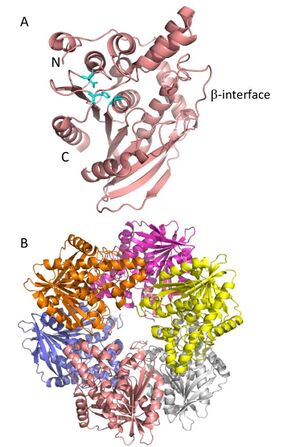 Figure 1: CAH from B. subtilis (PDB ID 1ODS). A) An individual monomer from the overall CAH structure showing the α/β-hydrolase fold formed by each subunit and the β-strand-like interface domain needed for association of the monomers. The catalytic triad of Ser181, Asp 269 and His 298 are highlighted in cyan. B) Characteristic donut-shaped quaternary structure of the CAH hexamer. Each monomer is represented in a different colour.

The CE7 family of esterases catalyze the removal of O-acetyl groups from cephalosporin-C, xylan and xylo-oligosaccharides [5, 7]. Members of this family present their active site residues in typical positions observed for α/β-hydrolases [9]. The catalytic triad residues responsible for de-O-acetylation are found on loops near the C-terminus of the β-strands 5, 7 and 8 for the catalytic serine, aspartate and histidine, respectively [10]. Similar to other α/β-hydrolases, the CE7 enzymes follow a mechanism where the serine is deprotonated by the histidine imidazole side chain; thereby allowing for nucleophilic attack of the serine on the incoming carbonyl of the substrate’s acetyl group [9]. The result is a transient tetrahedral oxyanion intermediate, which is stabilized by the backbone amide group of a highly conserved glutamate residue (found in a signature RGQ motif adjacent to the nucleophilic serine at the end of β-strand 4) and a less conserved tyrosine that together form the oxyanion hole of the enzyme [2, 5]. The tetrahedral intermediate then collapses resulting in an acetyl-enzyme intermediate and release of the de-O-acetylated product. A water molecule entering the active site is deprotonated by histidine and then nucleophilic attack by water on the acetyl-enzyme takes place to liberate acetate and the free enzyme [9]. A recent study on the CE7 AXE (TM0077) from T. martitima provided further support into the catalytic mechanism [2]. TM0077 was co-crystallized with PMSF and paraoxan (PDB ID 3M82 and PDB ID 3M83, respectively), two known serine protease inhibitors, that led to a 110° rotation of the catalytic serine and the formation of a covalent tetrahedral intermediate that was unable to collapse back to the starting materials (TM0077 and PMSF/paraoxan) [2]. Trapping the tetrahedral intermediate is strong evidence that CE7 enzymes proceed by the proposed mechanism.

Kinetic parameters and specific activities have been determined for some members of CE7. CAH from Bacillus subtilis, AXE from Paenibacillus sp. R4 and AXE (TM0077) from T. maritima were assayed for their activity against pNP-acetate and were found to have KM values of 0.29 +/- 0.01, 0.15 +/- 0.01 and 0.19 +/- 0.03 mM, respectively, and kcat/KM values of 260, 360 and 310 s-1mM-1, respectively [2, 5, 11, 12]. There has been discrepancy regarding the ability of these CE7 enzymes to utilize acetylated xylan as a substrate. While a Bacillus pumilus AXE has demonstrated a specific activity against acetylated xylan of 41 +/- 8 U/mg, T. maritima's AXE had no demonstrated activity and the acetyl xylan esterase, Axe1, from Thermoanerobacterium saccharolyticum strain JW/SL-YS485 had no activity in one study and 5.2 U/mg (8-fold lower than the B. pumilus enzyme) in another study [2, 4, 13, 14]. In light of the apparent low/no activity against acetylated xylan, the enzymes from T. maritima and T. saccharolyticum were assayed against smaller substrates, where the T. maritima AXE (TM0077) had high activity against glucose pentaacetate with a kcat of 2900 s-1 and Axe1 from T. saccharolyticum had high activity against xylose tetraacetate with separately reported specific activities of 210 and 740 U/mg [2, 4, 14]. Lastly, CAH from B. subtilis has been kinetically characterized with regards to activity towards cephalosporin-C with a KM of 24 mM and a kcat/KM of 7.0 s-1mM-1, which has supported its naming as a cephalosporin-C deacetylase [11].

Enzymes in the CE7 family contain high levels of multimerization, with the quaternary structure adopting a dimer of trimer hexamer structure[5]. For each of the six resolved structures from the CE7 family, individual subunits adopt a classic α/β-hydrolase fold that consists of a central eight-stranded β-sheet surrounded by α-helices on both sides (See Fig. 1A) [2]. Together, the multimerized subunits adopt a donut-like shape that results in the formation of a tunnel leading to the centre of the protein (See Fig. 1B). Each of the active sites from the individual multimers are arranged so that they face into the centre of the tunnel [5].

First Characterized
The first cephalosporin-C deacetylase (CAH) of this family to be characterized was from B. subtilis strain 168 in 1975 [15]. CAH is able to deacetylate cephalosporin-C, as well as cephalosporin-C derivatives (eg., cephalosporanic acid and cephalothin) at the C-3 position [15]. The first acetyl xylan esterase to be characterized was Axe1, from the anaerobic thermophilic bacterium T. saccharolyticum strain JW/SL-YS485 in 1995 [14]. When in the presence of acetylated xylan, Axe1 showed esterase activity that liberated acetate, leading to its name [14]. However, Axe1 has also demonstrated activity against other acetylated sugars [14].
First Mechanistic Insight
The first mechanistic insight into the CE7 family came from the CAH enzyme from B. subtilis in 1994 when Takimoto and coworkers tested the effects of various chemicals (eg., EDTA, PMSF, diisopropyl flurophosphate) on CAH activity and concluded that serine is likely important for catalysis [11]. Almost 10 years later in 2003, Vincent and colleagues resolved the crystal structure of CAH, confirming that serine was present in the active site and that an aspartate and histidine completed the catalytic triad [5]. More recently, co-crystallization of the AXE (TM0077) from T. martitima with PMSF and paraoxan (PDB ID 3M82 and PDB ID 3M83, respectively), two known serine protease inhibitors, led to trapping of the tetrahedral intermediate; thereby providing further support for the serine-histidine-aspartate mediated mechanism described for this family.
First 3-D Structure
The first resolved structure in this family was the cephalosporin-C deacetylase, CAH (PDB ID 1ODS) from B. subtilis strain 168 in 2003 [5]. The quaternary structure consisted of a trimer of dimers to make up a donut-shaped homohexamer with 32kDa subunits that each adopt the α/β hydrolase fold (See Fig. 1) [5]. The hydrophobic core containing the six active site centers is thought to help exclude large substrates[5]. In order for the hexamer to form, there are α-helix interactions as well as a β-strand-like interface associating between monomers (See Fig. 1A) [5, 9].