From CAZypedia
(Redirected from GH164)
Jump to: navigation, search 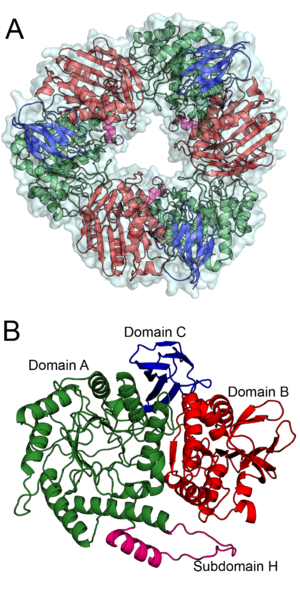 Figure 1. The trimeric structure of Bs164 is shown in panel A. All three protomers are shown with a surface and each chain is displayed as a cartoon diagram coloured by domain. B shows the structure of one protomer. Domain A, which has a (β/α)8 fold, is shown in green with subdomain H is shown in magenta, domain B, containing a mixed β-sheet, is shown in red and the β-sandwich of domain C is shown in blue. See also PDB IDs 6T5O, 6T75, 6T7G, and 6T6G.

The defining member of glycoside hydrolase family 164, a β-mannosidase from Bacteroides salyersiae (Bs164, GenbankID: EIY59668.1), was identified initially identified through rational bioinformatic selection of enzyme targets [1]. Although Bs164 was initially reported as an α-mannosidase, subsequent detailed biochemical characterization and structure determination revealed that was instead a β-mannosidase [2]. This enzyme is an exo-acting and is capable of cleaving mannooligos and β-mannosides[2].

Bs164 β-mannosidase is a retaining enzyme, as first shown by NMR [2], and follows the classical Koshland double-displacement mechanism.

The catalytic nucleophile of Bs164 was identified as glutamate 297 through mutational analysis[2]. A structural complex with 2,4-dinitrophenyl 2-deoxy-2-fluoro-β-D-mannopyranoside showed a covalent attachment of the inhibitor to glutamate 297, reinforcing the assignment of Glu297 as the catalytic nucleophile. The acid/base residue, Glu160 is positioned to perform anti-protonation of the leaving group, typical of clan GH-A glycoside hydrolases. This residue forms hydrogen bonding interactions with both the endocyclic nitrogen in noeuromycin and imidazole nitrogen in mannoimidazole. Complete loss of activity by the E160Q variant confirmed the assignment of Glu160 as the acid/base residue[2].

The structure of Bs164 was solved using multi-wavelength anomalous diffraction of a seleno-methionine labeled protein [2]. The structure of Bs164 has been solved in an uncomplexed state (PDB ID 6T5O), in complex with mannoimidazole (PDB ID 6T7G) and noeuromycin (PDB ID 6T6G), and as a covalent 2-deoxy-2-fluoromannosyl-enzyme intermediate (PDB ID 6T75). Bs164 exists as a donut shaped trimer (Figure 1A). Each trimer-donut has an outer diameter of approximately 100 Å and an internal diameter of between 30 and 35 Å. The individual Bs164 chains contain three clearly defined domains: a modified (β/α)8 barrel, a domain containing a seven membered mixed β-sheet sandwiched between α-helices, and a β-sheet domain (Figure 1B). The catalytic residues are present on strands 4 (acid/base) and 7 (nucleophile) of the (β/α)8 barrel indicating that GH164 belongs to clan GH-A glycoside hydrolases. This domain architecture is quite similar to that seen for family GH42 enzymes [3], but is previously unseen for β-mannosidases.