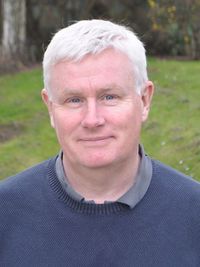 Gideon Davies obtained his B.Sc in Biochemistry from the University of Bristol in 1985 and followed this with a Ph.D (1990) with Herman Watson (X-ray crystallography) and Len Hall (Molecular Biology). In 1990 Gideon moved to the EMBL Hamburg Outstation to work with Keith Wilson on the use of synchrotron radiation in protein crystallography. Gideon subsequently moved to York to work with Dale Wigley and Guy Dodson on the structure of DNA gyrase, then continued in York where he started working on carbohydrate-active enzymes. During this time Gideon enjoyed study periods at CERMAV Grenoble with Bernard Henrissat and in Uppsala with Alwyn Jones. In 1996 Gideon was awarded a Royal Society University Research Fellowship to work on "protein-carbohydrate interactions" during which time he branched out from the polysaccharide degrading enzyme systems and focussed more on structural enzymology, the study of the reaction coordinate and on developing projects to look at carbohydrate synthesis and modification. In 2000 Gideon was the "Peter Wall Catalytic Visitor" at the University of British Columbia working with Steve Withers. Gideon is currently a Professor of the University of York. He was made a Fellow of the Royal Society in 2010.