The lytic transglycosidases, strictly speaking, are retaining enzymes. They are not hydrolases but rather catalyse an intramolecular glycosyl transferase reaction onto the C-6 hydroxyl group of the muramoyl residue leading to the generation of a terminal 1,6-anhydromuramoyl product (Figure 1) thus lacking a reducing end [3]. No detailed analyses involving both steady state and pre-steady state kinetic studies have been reported, but the Michaelis Menten (KM and Vmax) parameters have been estimated for E. coli MltA acting on insoluble peptidoglycan sacculi [2]. 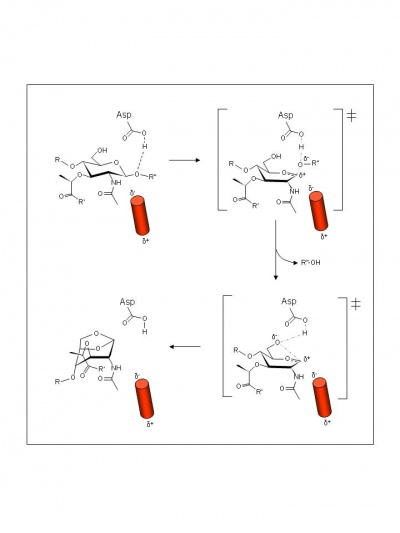 As with other lytic transglycosylases (families GH23, GH103, and GH104), the GH102 enzymes are thought to possess a single catalytic general acid/base residue. This residue in E. coli MltA has been identified as Asp308 and, indeed, its replacement with Ala abolishes catalytic activity [4].

The mechanism of action of the family GH102 enzymes has yet to be proven experimentally, but examination of crystal structures of E. coli MltA complexed with chitohexoase has led to the proposal of a novel mechanism of action involving the stabilization of the putative intermediate oxocarbenium ion by an alpha-helix dipole [5]. Thus, the catalytic Asp308 is proposed to serve initially as an acid catalyst to donate a proton to the glycosidic oxygen of the linkage to be cleaved leading to the formation of an intermediate with oxocarbenium ion character (Figure 2). In the absence of an anion/nucleophile in close proximity, this oxocarbenium intermediate is proposed to be stabilized by the negatively-charged side of the dipole that would exist at the C-terminal end of an alpha helix positioned just below the -1 binding subsite. This would be followed by abstraction of the C-6 hydroxyl proton of the intermediate involving Asp308 which now serves as the base catalyst leading to nucleophilic attack and the formation of 1,6-anhydromuramic acid product.

Three-dimensional structures are available for several Family GH103 enzymes, the first solved being that of E. coli MltA [4]. Unlike the other lytic transglycosylases of families GH23, GH103, and GH104 which possesses the well characterized α+β “lysozyme fold,” these enzymes have a unique structure consisting of two domains. One has a double-ψ β-barrel fold similar to the catalytic domain of the family GH45 endoglucanase V from Humicola insolens [6]. The second and smaller domain has a β-barrel fold topology. The large groove between the two domains serves as the active site cleft.