The only activity so far characterized within this recently discovered family of glycoside hydrolases is that of α-1,3-L-(3,6-anhydro)-galactosidase [1, 2, 3, 4, 5]. Nevertheless phylogenetic analyses (Figure 1) of this family together with activity tests for another member, Zg3597 (Clade C), show that the family GH117 most probably is polyspecific [3]. 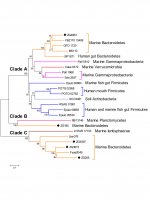 The stereochemical outcome of members of glycoside hydrolase family GH117 is still not determined experimentally. Nevertheless a mechanism based on the structure of an inactive mutant (BpGH117 E303Q) complexed to a neoagarobiose has been proposed [5] (Figure 2). In this unusual inverting catalytic mechanism an aspartic acid acting as the base and a histidine acting as the acid. An analogous Asp-His dyad has been similarly reported to act as the general base catalyst in the retaining mechanism of select GH3 members [6].

Two of the three 3D structures revealed the presence of a divalent cation, directly coordinated only by water molecules, close to the active site, which could activate the catalytic water molecule and provide the energy needed for the enzymatic reaction [3, 5]. Sequence alignments suggest that the enzymes of clades B and C do not bind divalent cation, which could be related to their difference in substrate specificity [3].

From structural analysis and sequence alignments the catalytic residues have been predicted to be Asp-90 as the base and His-302 as the acid BpGH117 numbering) [5].

Three crystal structures of GH117 family have been reported. Two are enzymes from marine bacteria, one from Saccharophagus degradans (PDB: 3R4Y) [4] and one from Zobellia galactanivorans (PDB: 3P2N) [3], the third one is from the human gut bacterium Bacteroidetes plebeius (PDB: 4AK5) [5]. GH117 adopts a five-bladed β-propeller fold and forms a dimer via domain-swapping of the N-terminal HTH (Helix-Turn-Helix) domain (Figure 3) [3]. Interestingly, previous sequences reported from Vibrio sp. JT0107 and Bacillus sp. MK03 contain the conserved domain-swapping signature SxAxxR in the HTH domain. Consistently, these proteins were reported to form multimers (a dimer and an octamer respectively), based on calibrated gel filtration estimations [1, 2]. In contrast, RB13146 (Clade B) lacks the domain-swapping signature, in which the crucial residues are missing. This enzyme from R. baltica thus likely occurs as a monomer and may represent an ‘ancestral’ form of the GH117 family, which would be limited to the catalytic β-propeller domain [3]. Structure of SdNABH and BpGH117 possess a ordered C terminus part which also interact with the adjacent monomer [4, 5]. Moreover in the case of BpGH117, His-392 from the C terminus of the monomer A participate in the substrate binding in the binding pocket of monomer B, and aims versa [5]. 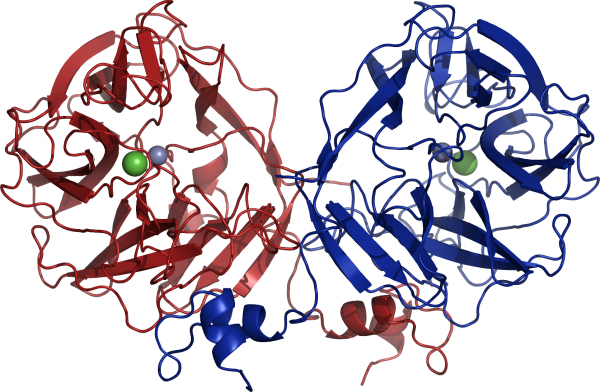