The majority of glycoside hydrolases of GH35 are β-galactosidases (EC 3.2.1.23). GH35 enzymes have been isolated from microorganisms such as fungi, bacteria and yeasts, as well as higher organisms such as plants, animals, and human cells. These β-galactosidases catalyse the hydrolysis of terminal non-reducing β-D-galactose residues in, for example, lactose (1,4-O-β-D-galactopyranosyl-D-glucose), oligosaccharides, glycolipids, and glycoproteins. Various GH35 β-galactosidases demonstrate specificity towards β-1,3-, β-1,6- or β-1,4-galactosidic linkages [1, 2, 3], and are often most active under acidic conditions [4, 5, 6]. As with many other CAZy families [7, 8, 9], GH35 members tend to be represented by multi-gene families in plants [3, 10, 11, 12, 13]. Moreover, plant GH35 β-galactosidases have be divided into two classes: members of the first are capable of hydrolyzing pectic β-1,4-galactans, while those of the second can specifically cleave β-1,3- and β-1,6-galactosyl linkages of arabinogalactan proteins [14].

Beta-galactosidases of GH35 catalyze the hydrolysis of terminal β-galactosyl residues via a classical Koshland retaining mechanism, which leads to net retention of the β-anomeric configuration of the released galactose molecule. The stereochemistry of the reaction was first shown by NMR for the human β-galactosidase precursor [4] and has been subsequently confirmed by other investigators for microbial and plant enzymes [1, 5] .

The catalytic residues for family 35 were first predicted on the basis of hydrophobic cluster analysis of proteins of similar protein fold [17]. Experimentally, the glutamic acid residue 268 was first identified as the catalytic nucleophile in human lysosomal β-galactosidase precursor using a slow substrate, 2,4-dinitrophenyl 2-deoxy-2-fluoro-β-D-galactopyranoside, which allowed trapping of a covalent glycosyl-enzyme intermediate and subsequent peptide mapping [18]. This approach was repeated for two bacterial β-galactosidases from Xanthomonas manihotis and Bacillus circulans [19]. The general acid/base residue was inferred to be Glu200 from structural studies of a Penicillium sp. β-galactosidase [20]. Recent structural studies (vide infra) revealed two different conformations of the general acid/base residue in the β-galactosidase of Trichoderma reesei [21].

The first 3D-structures of a GH35 enzyme, those of a β-galactosidase from Pencillium sp. (Psp-β-gal) in native (PDB 1tg7) and product-complexed (PDB 1xc6) forms, were reported in 2004 at 1.90 Å and 2.10 Å resolution, respectively [20]. The structure of a β-galactosidase from Bacteriodes thetaiotamicron (Btm-β-gal) was subsequently reported by the New York Structural GenomiX Research Consortium in 2008 at 2.15 Å resolution (PDB 3d3a). In 2010, an atomic (1.2 Å) resolution crystal structure of a Trichoderma reesei (Hypocrea jecorina) β-galactosidase (Tr-β-gal, PDB 3og2) was reported, together with complex structures with galactose, IPTG and PETG at 1.5, 1.75 and 1.4 Å resolutions, respectively (PDB codes 3ogr, 3ogs, and 3ogv, respectively) [21].

GH35 enzymes belong to Clan GH-A, and thus have an (α/β)8 (TIM) barrel as the catalytic domain, in which two glutamic acid residues act as the general acid-base and nucleophilic catalysts. These residues are located in strands 4 and 7 of the barrel.

The comparison of the native structures of Psp-β-gal, Tr-β-gal and Btmβ-gal reveals two things (Figure 1): Firstly, Btm-β-gal consists of three distinct domains, whereas Psp-β-gal and Tr-β-gal consist of five and six domains, respectively. The second and third domains of Btm-β-gal are quite similar with the fourth and fifth domains of Psp-β-gal, and with the fifth and sixth domains of Tr-β-gal. Secondly, major structural differences between Psp-β-gal and Tr-β-gal are in the conformations of the loop regions. Although the crystal structures of Psp-β-gal and Tr-β-gal are similar, the interpretation of the structure of Tr-β-gal is somewhat different from that presented earlier for Psp-β-gal: Rojas et al. considered Psp-β-gal to be composed of five distinct structural domains. The overall structure is built around the first, TIM barrel, domain. Domain 2 is an all β-sheet domain containing an immunoglobulin-like subdomain, Domain 3 is based on a Greek-key β-sandwich, and Domains 4 and 5 are jelly rolls [20]. In contrast, Maksimainen et al. concluded the domain 2 includes two different domains and thus the Tr-β-gal and Psp-β-gal structures both form six similar domains [21].

Additionally, Maksimainen et al. have described conformational changes in two loop regions of the active site of Tr-β-gal, that implicates a conformational selection mechanism for the enzyme (Figure 2). Unlike the induced fit theory, which assumes that the initial interaction between a protein and its binding partner induces a conformational change in the protein through a stepwise process, the conformational selection theory is based on the assumption that the unbound protein exists as an ensemble of conformations in dynamic equilibrium. Interaction between a weakly populated, higher-energy conformation and a binding partner causes the equilibrium to move in favor of the selected conformation [22, 23]. This can be seen in the structures of Tr-β-gal: the open and closed conformation are both favorable in the native structure and the closed conformation becomes more favorable in the complex structures. Furthermore, The acid/base catalyst Glu200 has two different conformations in the IPTG and PETG complex structures that clearly affects the pKa value of this residue and thus the catalytic mechanism of the enzyme [21]. 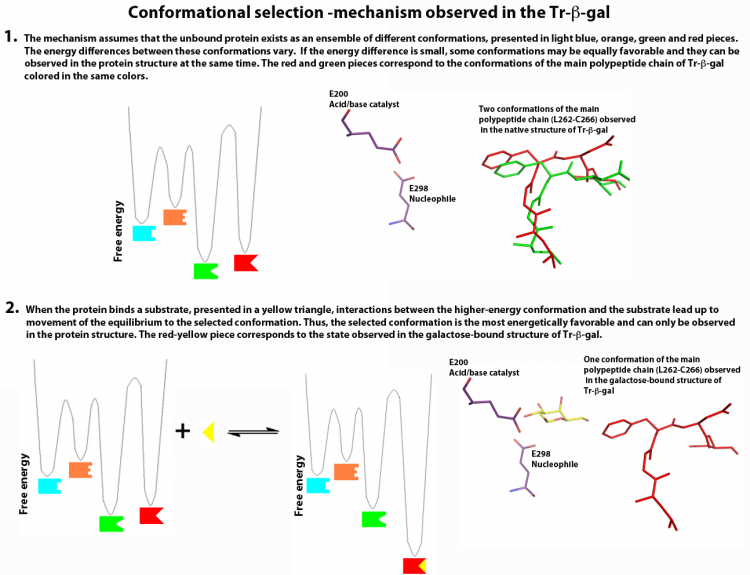 Figure 2. Illustration of the conformational selection mechanism observed in Tr-β-gal [21].