The GH52 enzymes are often isolated from various mesophilic and thermophilic bacteria, which has led to a demonstrated high thermostability within this family. The enzymes are generally monospecific, functioning as exo-β-xylosidases (EC 3.2.1.37) that cleave the terminal xylose residues from the non-reducing end of artificial xylosides and xylooligosaccharides (e.g., pNP-β-D-xylopyranoside [1, 2], xylobiose [2], and xylotriose [2]). Low levels of α﻿-L-arabinofuranoside activity has also been observed within members of the GH52 family [3, 4], which is similar to the specificity noted for GH13 and GH54 for β-xylooligosaccharides and α-L-arabinofuranosides. The specificity for these substrates is likely due to similarities in orientation of hydroxyls and glycosidic bonds of the substrate within the active site [5, 6]. Under certain conditions, some enzymes in the family have also exhibited weak transglycosylation activity, a phenomenon that has also been infrequently observed in other glycoside hydrolases [7]. The plasticity of the active site of some GH52 members has been further explored through site-directed mutagenesis, where introduction of xylanase activity [8] and transition from a glycoside hydrolase to a glycosynthase [9] has been achieved.

Retention of stereochemistry has been observed in GH52 β-xylosidases, which is characteristic of a classical Koshland double-displacement mechanism [10]. This was first determined by Bravmen and coworkers using 1H-NMR to analyze the breakdown products of pNP-β-D-xylopyranoside by XynB2, a β-xylosidase from Bacillus stearothermophilus T-6 [1]. Further detailed analysis within this family was published in 2003 on the B. stearothermophilus XynB2 enzyme, which contained pH dependence studies (enzymatic catalysis is dependent on ionizable residues E335 and D495, with free enzyme experimental pKa values of 4.2 and 7.3, respectively) and kinetic analyses (pNP-xylobiose kcat/KM of 140 s-1mM-1; xylobiose and xylotriose KM values of 17.1x104 M-1 and 9.6x104 M-1, respectively) [4].

Site-directed mutagenesis, chemical rescue, and kinetic profiling of XynB2 from B. stearothermophilus T-6 identified E335 as the catalytic nucleophile and D495 as the general acid/base [1, 11]. The catalytic nucleophile (E335) is conserved within the WVVNEGEY motif, which is found approximately 150 residues up-stream from the EITTYDSLD motif containing the general acid/base (D495). These results were further confirmed following the structural analysis of a GH52 from Geobacillus thermoglucosidasius [2], where in this structure the 6.5 Å separation of Glu and Asp in the active site was typical of retaining enzymes. 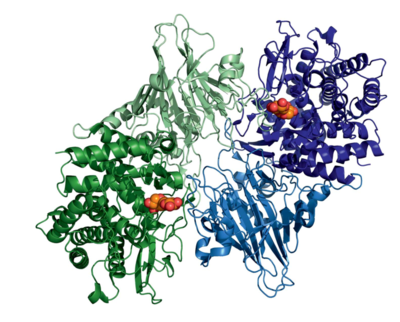 Figure 1. The dimeric structure of GH52 from Geobacillus thermoglucosidasius in complex with xylobiose (orange)(PDB ID 4C1P). The active site is enclosed by residues from both monomers, restricting this enzyme to exo-hydrolysis via steric hindrance of the catalytic site. Figure from [2].

Representative structures of GH52 glycoside hydrolases have been solved, XynB2 from B. stearothermophilus T-6 (PDB ID 4RHH) and GT2_24_00240 from G. thermoglucosidasius (PDB ID 4C1P; PDB ID 4C1O). These enzymes have folds comprised of an N-terminal β-sandwich domain and a C-terminal (α/α)6 barrel domain (Figure 1) that has led to their classification into Clan GH-O, together with GH116. The exo-acting mode-of-action of GH52's is reflected in the topology of the active site. The enzymes act as dimers in solution [1, 2], with interactions between monomers of the GH52 from G. thermoglucosidasius (PDB ID 4C1P) forming a deep pocket to enclose and distort the non-reducing end xylose into a high-energy 4H3 half-chair transition conformation, while simultaneously hindering the entry of large xylan polymers into the catalytic site [2]. Furthermore, the structure of the active site also allosterically inhibits access to negative subsites beyond the -1 site. This permits interaction with only a single xylosyl residue in the negative subsites and thus hydrolysis yields a lone xylose molecule. In summary, this mechanism promotes strict exo-β-xylosidase activity, while inhibiting activity on large polymers, such as xylan.