From CAZypedia
(Redirected from PL1)
Jump to navigation Jump to search

The PL1 family polysaccharide lyases (PL1) harness anti-β-elimination chemistry to cleave α-(1,4)-linked d-galacturonan to produce oligosaccharides with an unsaturated hexenuronic acid residue and a new reducing end (EC 4.2.2.2) [1, 2, 3]. Pectin lyases differ from pectate lyases as they are active against a substrate bearing methyl-ester groups at C6 (EC 4.2.2.10). The geometry of the α1,4-linkage facilitates anti-β-elimination about the C4-glycosidic oxygen bond.

The mechanism involves acidification of the C5 proton of the galacturonan residue binding to the +1 subsite of the enzyme, abstraction of this acidified proton, and subsequent leaving group elimination. The leaving group provides a new reducing end and the group from which it was eliminated has an unsaturated C4-C5 bond. The mechanism of proton abstraction from carbon acids is discussed by Gerlt and Gassman [4]. 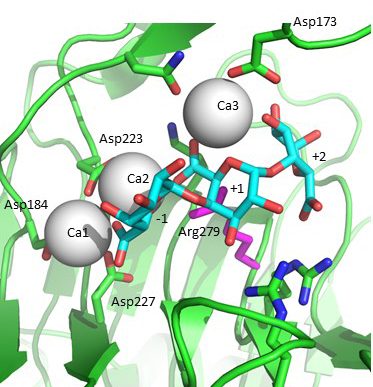 Figure 2. Michaelis complex formed using Bacillus subtilis pectate lyase R279A mutant and trigalacturonic acid. The galacturonan residues are labelled according to the subsites they bind: -1, +1, +2. The catalytic arginine is modeled back in the position seen in the native structure and is close to the C5 proton abstracted. The two "catalytic" calcium-ions bound between enzyme and substrate carboxylates that acidify the C5 proton are Ca2 and Ca3.

Acidification of the C5 proton in the polysaccharide family 1 enzymes is by the binding of two “catalytic” calcium-ions which are bound only in the Michaelis complex and not to the free enzyme [5, 6, 7]. Abstraction of the C5 proton is by the catalytic arginine, the Brønstead base [5, 6, 7]. The Bacillus subtilis Michaelis complex is shown in Fig. 2. Protonation of the leaving group is probably by solvent water, though other possibilities have been discussed in the literature.

Pectate lyases PelC (endo-acting) [8] and PelE (exo-acting) [9] from Erwinia chrysanthemi, (2PEC) and endo-acting Bacillus subtilis pectate lyase [10] (1BN8). These PL1 structures are remarkable in showing the polypeptide chain folded into a right-handed superhelix comprising three β-strands per turn with turns stacking to form a domain of three parallel β-sheets. The structures showed that parallel β-sheets are stable in the absence of protecting α-helices and revealed remarkable side-chain stacks particularly in the hydrophobic interior. Structures of pectin lyase followed [11, 12], they are closely similar to pectate lyase have the arginine acting as Brønstead base but also have more hydrophobic active centres suitable for binding methylated pectin. The β-helix fold is conserved in other PL families including PL3 and PL9.

First description of catalytic activity
Pectin trans-eliminase activity was first demonstrated in 1962 by Albersheim [1].
First catalytic base identification
Arginine was identified as the catalytic base from the complex of PelC with pentagalacturonate formed using the inactive mutant in which the arginine was substituted by lysine [5, 6]. The structure showed that the arginine would be in the correct position to abstract the C5 proton. Comparison of PL10 and PL1 Michaelis complexes cemented the role of the arginine as Brønstead base [13]. More detailed information on specificity emerged from a more recent study [7] which showed the central three subsites bound galacturonsyl-residues, but that the more remote subsites could tolerate methylated galacturonsyl-residues.
First catalytic divalent cation identification
The importance of acidifying the C5 proton by stabilizing the charge on the substrate carboxylate was acknowledged early though the conserved arginine was originally thought to fulfil this function [10]. It was later shown that two catalytic calcium-ions bound in the Michaelis complex acidify the C5 proton facilitating its abstraction [5, 6].
First 3-D structures
The first structures of PL1s reported were PelC [8] and PelE [9] from Erwinia chrysanthemi. The first PL1 structure from Bacillus subtilis was reported in 1994 [10].