From CAZypedia
(Redirected from PL9)
Jump to: navigation, search

PL9 acts by an anti-β-elimination mechanism generating a 4,5-unsaturated galacturonic acid product and a new reducing end. The elimination of C5 proton is base-catalyzed by lysine 237 [1]. Similar to the PL1 family, a calcium ion interacts with the substrate carboxylate at +1 subsite promoting the C5 proton acidification. [1, 5]. The characterization of the Bacteroides thetaiotaomicron rhamnogalacturonan lyase (BT4170) revealed an additional calcium ion also interacting with the substrate and playing a role in catalysis (Figure 1) [2]. 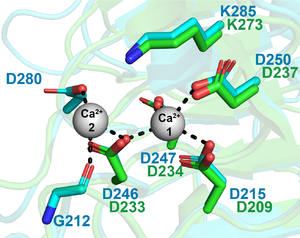 Figure 1. BT4170 (PDB ID 5OLR) and Pel9A (PDB ID 1RU4) active site. Superimposed active residues of BT4170 (cyan) and Pel9A (green). The calcium ions are represented as spheres (gray). The first calcium is found in both structures. However, Ca2+_2 is only present in BT4170 struture.

In Pel9A the lysine 237 (K237) is the Brønstead base (responsible for the abstraction of the C5 proton from galacturonic acid at +1 subsite). The calcium coordination pocket is comprised of four aspartates (D209, D233, D234 and D237) [1]. These residues are essential in catalysis and invariant in PL9 family (Figure 1) [2]. In BT4170 rhamnogalacturonan lyase, the residues G212, D246 and D280 comprise a second calcium binding site that is not conserved in pectate lyases (Figure 1) [2]. 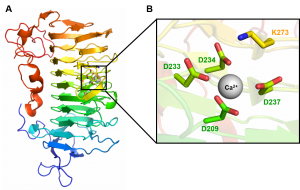 PL9 structure of Erwinia chrysanthemi (Pel9A) was solved at a resolution of 1.6 Å (PDB ID 1RU4) and displays a right-handed parallel β-helix fold (Figure 2A). The superhelical structure presents 10 complete coils and 3 β -sheets (PB1, PB2, PB3). A short α-helix at N-terminus caps the hydrophobic core of the parallel β -helix. The catalytic base K237 and calcium binding site are orientated in the structure cleft (Figure 2B) [1]. The structure of the rhamnogalacturonan lyase (BT4170) in complex with the enzyme product showed that apart from the catalytic apparatus, there is little conservation of substrate binding residues between this enzyme and the pectate lyase Pel9A [2].