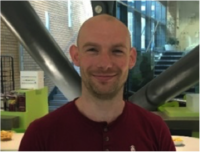 Alan Cartmell did his B.Sc. in Biochemistry at Newcastle University and then completed both an M.Res and Ph.D under the supervision of Professor Harry Gilbert. The work during his doctoral studies focused on structure/function studies of novel glycoside hydrolases from GH26, GH43 and GH124 families. He then undertook a two year postdoctoral fellowship at the La Jolla institute for Allergy and Immunology in the laboratory of Professor Dirk Zajonc. The position was funded by a juvenile diabetes research foundation junior postdoctoral fellowship and focussed on the class I tyrosine phosphatase PTPN22 involved in type 1 diabetes. He then had a temporary 3 month position in the laboratory of Professor Spencer Williams focusing on elucidating the mechanism of action of GH76 enzymes. After this short spell with Professor Spencer Williams he returned to Professor Harry Gilbert's laboratory where he worked on elucidating how members of the human gut microbiota (HGM) catabolised plant glycans (Pectins and Arabinogalactans) from the human diet. He is currently a Tenure-Track Fellow at the University of Liverpool with a recent focus on exploring how sulfated glycans, such as glycosaminoglycans and sulfomucin, are metabolised by the HGM and the host itself.