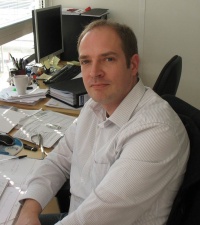 This is the user page of Cédric Montanier. My first contact with the carbohydrate-active enzymes was motivated by the functional significance of peptide motifs conserved in large multigene glycosyltransferase families, in particular the GT8 family. This work was done with Christelle Breton from CERMAV (Grenoble, France) and Catherine Letondal from Institut Pasteur (Paris, France).

In 2004, I then moved further North to Newcastle-upon-Tyne in England for a PhD under the supervision of Harry Gilbert. The work focused on the mechanism and functional importance of protein carbohydrate recognition, more specifically with the families CBM35, 60 and 62 and the family CE2, using a combination of X-ray crystallography, enzyme kinetics and isothermal titration calorimetry.

I then followed the sun to the South of France, in Toulouse, where I joined the Enzyme Molecular Engineering and Catalysis group headed by Magali Remaud-Siméon, for two post-docs. The topic of the first one was to design by rational engineering a lipase from Candida antarctica in order to synthetized ecofriendly ester and amide based polymers. During my second post-doc, I moved back to the carbohydrate-active enzymes, as I developed by molecular engineering a xylane glycoside hydrolase into a transglycosidase in order to synthetize tailored xylooligosaccharides directly from biomass-isolated pentose fraction.

In 2012, I obtained a permanent research scientist position at INRA (French National Institute for Agricultural Research) in the group of Michael O'Donohue, based in Toulouse. My main interest is to understand the synergism between GHs leading to the deconstruction of plant cell wall and the contribution of the CBMs occurring during this complex process. My background in enzyme engineering leads me to develop an artificial cellulosome to understand the synergism activity of several GHs, on insoluble substrates and intact plant cell wall. I am also interested in new approach to visualize and quantify the result of a deconstruction process, for instance using X-ray computed micro-tomography.