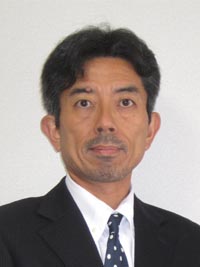 Hisashi Ashida is a professor in the Department of Science and Technology on Food Safety, Faculty of Biology-Oriented Science and Technology, Kinki University. He graduated from Kyoto University in 1988, and received his Ph.D. degree of Agricultural Science from the same university in 2000 under the supervision of Prof. Kenji Yamamoto. He became a post-doctoral fellow at the Department of Biochemistry, Tulane University School of Medicine (Prof. Yu-Teh Li) from 2000 to 2001, and then at the Research Institute for Microbial Diseases, Osaka University (Prof. Taroh Kinoshita) from 2001 to 2004. He obtained the position of an assistant professor at Prof. Kinoshita’s laboratory in 2004. In 2006, he moved to the Graduate School of Biostudies, Kyoto University (Prof. Yamamoto), and promoted to an associate professor in 2008. He moved to Kinki University in 2012. His research interests are the metabolism of complex carbohydrates in animals and microbes. He discovered GH129 [1], and also contributed to the discoveries of GH98 [2] and GT76 [3].