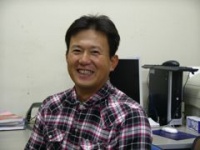 Katsuro Yaoi is a senior research scientist at National Institute of Advanced Industrial Science and Technology (AIST) in Japan. He received his academic training in Tokyo University of Agriculture and Technology. He finished his graduate work with M.S. (1996) and Ph.D. (1999) degrees. He did his postdoctoral work at the same laboratory (1999-2001). In 2001, he moved to AIST. His major interest is understanding the mode of action of GH74 xyloglucan hydrolases [1, 2, 3] (for which GH74 has been created).

He loves baseball, and his son and daughter belong to a little league baseball team. Their dreams are playing in the Little League World Series in Williamsport, USA.