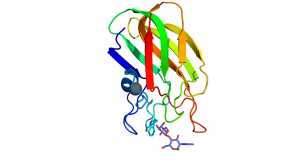 The CBM32s share the common beta sandwich fold and have a bound structural metal ion that is most often attributed to be calcium [13]. Most family members have fairly weak binding affinities (Ka values in the mM-1 and low μM-1 range) [5, 10, 11]. These binding site are located at the terminal loop region within the CBM32 family. The binding sites are, in some cases, quite shallow and designed to bind monosaccharides or short oligosaccharides, making these type C CBMs [8, 9, 10, 11]. Variability within the apical loop region within the family confers the different ligand specificities. Characteristically, there is one residue, commonly Trp but also Tyr, which provides an important hydrophobic platform for interaction with the ring of one of the sugar moieties (Figure 1) [2, 9, 10]. In most cases, the CBM32 members interact with the saturated non-reducing end of oligosaccharides [5, 8, 9, 10, 11]. However, this is not always the case, as demonstrated by the periplasmic-binding protein from Y. enterocolitica, which shares sequence identity with the CBM32 family [14] and binds polygalacturonic acid polymers [6] or the CBM32 domain of the alginate lyase AlyQ, which specifically recognizes a 4,5-unsaturated uronate at the non-reducing end [7].

CBMs, in general, are thought to target pendant catalytic modules to their respective substrates. CtCBM32 from a C. thermocellum manannase potentiates the hydrolytic function of the enzyme and prevents transglycosylation reactions by preferentially binding the non-reducing end of β-mannans. Thus, the CBM32 may sterically block the access of longer manno-oligosaccharide acceptor molecules to the enzyme active site thereby enhancing hydrolysis and affecting the products of catalysis [5].

CBM32s from the Gram-positive pathogen C. perfringens may well have a dual role as many of the enzymes containing CBM32s have an LPXTG motif at their C-terminal end, which generally signals for sortase-mediated anchoring to the bacterial cell wall [16]. Thus, not only would the catalytic modules be targeted to substrate, but also the bacterium as a whole, suggesting an adhesin-like activity for these CBMs [17].

The types of catalytic modules that the CBM32 members are associated with vary widely and include sialidases [8], β-N-acetylglucosaminidases [18], α-N-acetylglucosaminidases [19], alginate lyases [7], mannanases [5] and galactose oxidases [1]. In enteric bacteria the CBM32 motif may occur more than once in the same enzyme and they may or may not share the same ligand specifities; this suggests the possibility of heterogenic multivalent binding events [8, 9, 12]. Other modules that may be associated in the same enzymes are different families of CBMs, FNIII domains, and cohesin and dockerin domains [9, 17, 20, 21]. There are now examples of CBM32s that are independent of a catalytic module, such as the YeCBM32 periplasmic-binding protein [6].

As an example of an unusual biotechnological application, the ligand binding loops from CpCBM32-2 from the NagH enzyme were modified to create polyol-responsive antibody mimetics for affinity purification of specific proteins [22]. This CBM32 application speaks to the plasticity within the loop binding region.

First Identified
The galactose-binding function of CBM32 was first suggested by crystallography of a galactose oxidase from the fungus Fusarium graminearum [1] (previously Dactylium dendroides [23]).
First Structural Characterization
In 1991, the first crystal structures of a galactose oxidase from the fungus F. graminearum (e.g. PDB ID 1GOF) revealed an N-terminal CBM32, although this study did not explore the carbohydrate-binding function of this module [24]. The first available complex structure of a CBM32 is from the same galactose oxidase soaked with galactose [1]; unfortunately, a corresponding entry in the RCSB Protein Data Bank is lacking.