From CAZypedia
(Redirected from CBM42)
Jump to: navigation, search 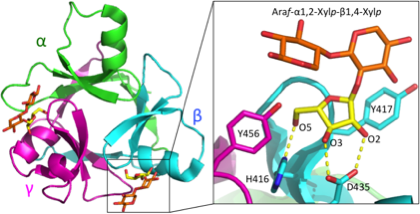 CBM42s have a β-trefoil fold that is similar to CBM13 and R(ricin)-type lectins (Figure 1). The module has a sequential 3-fold internal repeat of approximately 45 amino acid residues comprising three subdomains. The three subdomains are denoted as α, β, and γ. Each subdomain contains a discrete ligand binding site, but one of the three subdomains sometimes loses its function due to mutations at critical residues for ligand binding. CBM42s are typical Type C CBMs that bind termini of glycans with pocket-type binding sites for short oligosaccharides. The binding pockets are small but can accommodate the branched side chain L-arabinofuranosyl moiety attached to the xylan backbone of arabinoxylans [3]. The binding sites are located at side pockets of the triangular structure of the β-trefoil fold. Residues important for the binding to a non-reducing end L-arabinofuranosyl group are as follows: an aspartate forming hydrogen bonds to the O2 and O3 hydroxyls, a histidine forming a hydrogen bond to the O5 hydroxyl, and two aromatic residues (tyrosine, tryptophan, or phenylalanine) stacking to the furanose sugar (Figure 1). They are D425, H416, Y417 and Y456 in the β-subdomain of AkAbfB and are conserved in functional CBM42 subdomains.

CBM42s are thought to target catalytic modules (usually α-L-arabinofuranosidases) to hemicelluloses that have L-arabinofuranosyl termini or branches. Mutations at the binding sites of CBM42 significantly reduced the catalytic activity toward natural polysaccharides in these enzymes, whereas the activity toward p-nitrophenyl α-L-arabinofuranoside was not affected [3, 5]. These modules are commonly associated with α-L-arabinofuranosidases or exo-arabinanases of GH2, GH43, GH54, GH93, or non-classified GHs [5]. A survey using the GH-CBM tool shows that CBM42s are also associated with GH16 or GH30. As a typical exo-type (Type C) CBM, the CBM42 in AkAbfB shows relatively low binding affinities to L-arabinofuranose-containing oligosaccharides with Ka values of 1~5 ×103 M-1. [3]. In a novel application of CBM42 molecules, a CBM42 was fused to a feruloyl esterase to create a chimeric enzyme with enhanced thermostability and exhibited a four-fold higher activity on insoluble arabinoxylan [6].

The first structure of CBM42 was revealed in 2004 in the x-ray crystal structure of AkAbfB in complex with arabinose as a full-length structure with a catalytic GH54 domain 1wd4 [2].