From CAZypedia
(Redirected from CBM60)
Jump to: navigation, search

CBM60 is a bacterial family that comprises around 120 amino acids. The CBM60s from the Cellvibrio japonicus GH11 xylanase CjXyn11A (CjCBM60A) and a second GH11 xylanase (vCBM60), derived from an uncultured bacterium, were shown to display similar broad ligand specificities binding to galactan, xylans, and β-glucans [1]. ITC experiments were performed using a large set of polysaccharides and oligosaccharides [1]. Affinities (KD) for ligands were in the high and very low µM range for CjCBM60A and vCBM60, respectively [1]. Cell labelling of plant cell wall sections indicated that xylan is the biologically relevant ligand for the two characterized CBM60s [1]. vCBM60 bound to oligosaccharides with a degree of polymerization (DP) of 2 or 3 with affinities similar to the cognate polysaccharide. Binding of CjCBM60A to xylooligosaccharides that extended outside the predicted ligand binding site were 20-30-fold lower than for the xylans. This increased affinity for the polysaccharide compared to oligosaccharides is an example of avidity effects through dimerization of the protein as demonstrated by gel filtration only with CjCBM60A [1]. It was proposed that the 10 residue C-terminal extension of CjCBM60A (compared to vCBM60), which contains cysteines, mediates dimerization through the formation of inter-chain disulphide bonds [1]. The affinity of the CBM60s for their ligands was enthalpy-driven and highlighted a single carbohydrate binding site per CBM [1]. Each protein molecule covered 4-6 sugars at saturation, displaying a similar affinity for long polysaccharides, indicating an endo-mode of binding. This endo-mode of binding to soluble polysaccharide chains indicates that vCBM60 and CjCBM60 are type B CBMs. 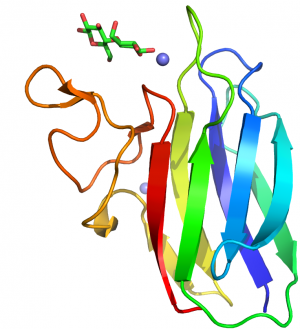 Figure 1. The fold of vCBM60 in complex with galactobiose (PDB ID 2XFE), highlighting the location of the ligand binding site formed by three loops connecting the two β-sheets. 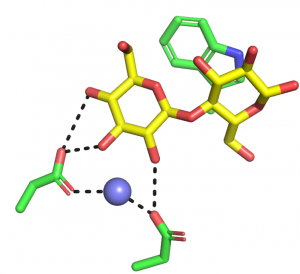 Figure 2. The structure of vCBM60 in complex with galactobiose showing the role played by two aspartates in direct ligand recognition and via a calcium. Interactions are exclusively with O2 and O3 of the non-reducing galactose illustrating the broad specificity of the CBM for sugars containing an equatorial O2 and O3. The second binding site interacts with the ligand through hydrophobic interactions provided by a tryptophan.

The crystal structure of vCBM60 in complex with cellotriose and galactobiose revealed a classical distorted β-jelly-roll fold consisting of eight β-strands in two antiparallel β-sheets, each of four strands (Figure 1 [1]). The edges of the protein structure comprise five and three loops respectively, and one α-helix completes the structure (Ala75- Glu76- Asn77). On one edge, three loops (5, 7 and 8) form a deep and wide cleft (≈ 17.4 Å broad and 5.5 Å deep) that is stabilized by a disulphide bond (Figure 1; PDB ID 2XFE). In complexes with vCBM60, galactobiose (Figure 2; PDB ID 2XFE) and cellotriose (PDB ID 2XFD) are located in the cleft, which thus comprises the ligand binding site. Unusually for an endo-acting CBM the ligand binding cleft contains only two sugar sites. The reducing end sugar makes hydrophobic contacts with Trp85. The non-reducing end sugar also makes non-polar contacts with Trp85 but sugar binding is dominated by the side chains of two aspartates. The carboxylates of these residues hydrogen bonds with O2 and O3 of the sugar, and interact with a calcium. This divalent metal ion also makes polar interactions with O2 and O3 of the sugar (Figure 2). The essential role played by the two aspartates, Trp85 and calcium was confirmed by mutagenesis and metal chelation with EDTA [1]. The specificity for equatorial O2 and O3, with no interactions with O4 and O6, explain why the CBM can bind to a range of hexose and pentose pyranose sugars, while excluding mannose-configured ligands where O2 is axial. Based on the conservation of the ligand binding residues in other family 60 CBMs, it was predicted that ligand recognition is similarly conserved in CBM60 [1].

CjCBM60 is derived from an enzyme containing a GH11 xylanase (Asn26 to Glu227), a CBM60 (Ile256-Cys370), a CE4 esterase (Gly398-Pro586) and a C-terminal CBM10 (Asn614-Asn661) [2]. vCBM60 is located in a GH11 xylanase, but no further information regarding additional modules is available. CBM60s are found in a number of GH11 xylanases, some of which contain esterase catalytic modules and additional CBMs. A cohort of these CBMs are also found in GH53 enzymes that are predicted to be endo-β1,4-galactanases, consistent with their recognition of galactan in addition to xylan. Some of the CBM60s contains the C-terminal extension evident in CjCBM60, and it was proposed that these modules dimerize leading to increased affinity through avidity effects [1]. CBM60 shares with family 36 CBMs a conserved metal ion playing a dominant role in binding carbohydrates with an equatorial O2 and O3 [3]. This is consistent with the similar ligand specificities displayed by the two families. Sequence and structural analyses revealed that the family 60 CBM arose through the circular permutation of CBM36 [3]. The reorganization of the β-sandwich fold did not disrupt the topology of the binding site. Cell wall labelling experiments were carried out using intact cell walls of tobacco stem sections by immunohistochemistry [1].

The first CBM60s to be characterized were CjCBM60A from GH11 C. japonicus xylanase CjXyn11A (originally defined as XYLE) and vCBM60 obtained from an environmental library of GH11 xylanases [1].

The first crystal structure of this family is vCBM60 [1].