From CAZypedia
(Redirected from CBM65)
Jump to: navigation, search

The founding members of family CBM65 (CBM65A and CBM65B) were identified in Eubacterium cellulosolvens endoglucanase EcCel5A [1]. This bacterial CBM family displays affinity to plant cell wall polysaccharides. Both modules CBM65A and CBM65B bind to acid swollen cellulose, β-1,3/1,4 mixed linked glucans (lichenan and barley β-glucan) and decorated β-1,4-glucans such as xyloglucan, hydroxyethylcellulose (HEC) and carboxymethylcellulose (CMC) [1, 2]. Both CBM65 modules also have weak affinity for glucomannan but there is no reports of binding to additional alpha- or beta-glucans [2]. By isothermal titration calorimetry (ITC), CBM65A displays higher affinity for xyloglucan comparative to β-1,3/1,4 mixed linked glucans and HEC. Additionally, this CBM binds with similar affinity to the oligosaccharides cellopentaose and XXXG (X comprises glucose decorated at O6 with xylose and G corresponds to undecorated glucose), the repeating unit of xyloglucan. Binding to shorter cellooligosacharides was too week to be quantified (cellotetraose) or not detectable (cellotriose) [2]. 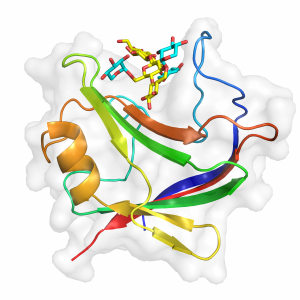 Figure 1. CBM65B in complex with XXXG. Schematic representation of CBM65B β-sandwich fold colour ramped from blue (N-terminal) to red (C-terminal), embedded in the surface representation of the protein. XXXG is shown in stick format with glucose and xylose carbons colored yellow and magenta, respectively.

The three-dimensional structures of Eubacterium cellulosolvens CBM65A (4AFM) and CBM65B (2YPJ), solved using X-ray crystallography, display a beta-sandwich fold (Figure 1) [2]. The ligand binding site located at the concave surface of the protein adopts a cleft-like structure typical of a type B CBM [2].

The CBM65B structure was obtained in complex with XXXG (Figure 1). Four tryptophans (W602, W607, W651, and W646) make extensive hydrophobic contacs with the backbone and the xylose side chains. Alanine substitution of these tryptophans abrogated cellohexaose and β-glucan recognition, confirming the important role of these aromatic residues in backbone recognition. The mutagenesis of W607, W646 also caused a substantial reduction in affinity to xyloglucan. However, only the mutation W651A abrogated binding to all ligands (xyloglucan, β-glucan and cellohexaose), confirming the key role of this residue in ligand backbone and side chain recognition [2]. An additional aromatic amino acid (Y685) also makes hydrophobic interactions with xylose side chains. The mechanism of ligand recognition by CBM65A and CBM65A is driven by apolar interactions with the surface of these conserved five aromatic residues (W602, W607, W651, W646 and Tyr685), where the hydrophobic interactions with the xylose side chains make a significant contribution to CBM65 binding. Indeed, this recognition of xylose side chains explains the higher affinity to xyloglucan and XXXG comparatively to undecorated β-glucans and cellotetraose, respectively [2].

The structure in complex revealed that ligand binding is also driven by polar interactions between Q110 and the glucose backbone, since the alanine substitution of this residue significantly reduce binding to β-glucan and cellohexaose [2]. A second polar residue (Q106), only present in CBM65A, also plays an important role in ligand recognition. The alanine mutation of Q106 abrogated cellohexaose recognition but has no impact on binding to mixed linked β-1,3/1,4-glucans (by ITC and plant cell wall labelling assays), suggesting that this residue has a key role only in cellulose recognition and that the CBM65A binding site is capable of specifically recognizing both linear β-1,4-glucans and β-1,3/1,4 mixed linked glucans [2].

CBM65 modules were first identified in the Eubacterium cellulosolvens EcCel5A endoglucanse. The molecular architecture of EcCel5A shows two CBM65 modules (denominated A and B) appended to two glycoside hydrolase family 5 (GH5) [1]. The CBM65A and CBM65B specificity for β-glucans (β-1,4 and β-1,3/14-mixed linked) is consistent with the reported activity of the appended enzymes [1]. Indeed, both GH5 catalytic modules are more active on lichenan (β-1,3/1,4 mixed linked glucan) and carboxymethylcellulose (β1,4-glucan) than on xylan. The removal of the CBM65 modules associated with the GH5 catalytic domains resulted in a significant decrease of the enzymatic activity against all tested substrates, suggesting that both binding modules have an important role in catalysis by enhancing the enzyme activity [1].

First Structural Characterization
The first available crystal structure and the first complex structure of a CBM65 were CBM65A (4AFM) and CBM65B (2YPJ), respectively [2].