All the family 10 CBMs (CBM10s) are bacterial in origin. These CBMs were shown to bind to crystalline cellulose with an affinity (Ka) of ~2.5 x 105 M-1, while NMR titration experiments showed very weak binding of cellohexaoase (Ka of 1.0 x 102 M-1) [1]. No binding to other plant cell wall polysaccharides such as xylans, mannans or mixed linked β-glucans were detected [2]. 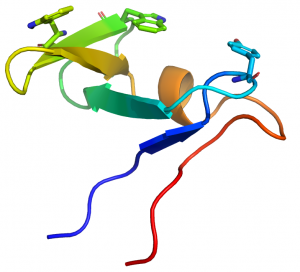 CBM10 modules generally comprise ~45 amino acids. The structure of the protein from the Cellvibrio japonicus GH10 xylanase Xyn10A was determined by NMR (see PDB ID 1E8R) [3]. The proteins displays a oligonucleotide/oligosaccharide-binding (OB) fold and is the only CBM family, to date, to adopt this secondary structure. The structure of CBM10 consists of five β-strands, organized as two antiparallel sheets, one of three strands (β-sheet 1) and one of two (β-sheet 2) that are approximately perpendicular to each other. The structure also contains a short stretch of α-helix. The protein is stabilized by two disulfide bridges.

The CBM10 module displays a planar surface that contains three aromatic residues, two contributed by the middle strand of β-sheet 1 (Trp22 and Trp24) and one by the loop connecting the strands in β-sheet 2 (Tyr8) (Fig. 1). Chemical modification of the CBM10 module with N-bromosuccinimide in combination with mutagenesis confirmed that Trp24 and Trp22 were on the surface of the protein [4]. The position of the three planar aromatic residues indicate that they make hydrophobic interactions with glucose residues n, n+2 and n+4 in the chains of crystalline cellulose. Mutagenesis studies confirmed the critical role played by the aromatic residues in cellulose recognition [4]. The importance of the three planar residues was also proposed by their conservation (tryptophans or tyrosines) in other CBM10 members. Similarly the four cysteines that formed the two disulfide bonds are invariant in the family and it was suggested that they played a generic role in protein stabilization. The planar topography of the ligand binding site and the observed specificity for insoluble cellulose indicate that the protein module is a type A CBM.

CBM10 modules have been observed in characterized cellulases [5], xylanases [1, 2], mannanases [6] and lytic polysaccharide monooxygenases (LPMOs) [7]. Many of these modular enzymes contain CBMs in addition to a CBM10 member, with CBM10-CBM2 modular motifs being particularly common in glycoside hydrolases from C. japonicus [8] and Saccharophagus degradans [9]. CBM10s were shown to enhance the activity of cellulases [1] and LPMOs [7] against crystalline cellulose, and it was proposed that this capacity to boost catalytic function was through increasing the local concentration or proximity of the enzyme in the vicinity of the substrate. CBM10-CBM2 combinations in single enzymes did not increase affinity through avidity effects or act synergistically to enhance cellulase activity [1]. Fluorescent imaging studies showed that the type A CBM2 and CBM10 cellulose binding modules, derived from C. japonicas Xyn10A, displayed differential binding to plant cell walls that was dependent upon cell type, tissue, and taxon of origin [10]. These modules are deployed in the exploration of the architecture of plant cell walls [10, 11].