CBM22 is predominantly a bacterial family of protein modules that comprises around 150 amino acids. The primary target for CBM22 members is xylan, although they bind <100-fold weaker to soluble β1,4-glucans and β1,3-β1,4-mixed linked glucans [1, 2, 3]. There is one report showing significant qualitative binding of a CBM22, derived from a ruminal protozoan GH10 xylanase, to different forms of crystalline cellulose [4] . CBM22s from thermophilic and mesophilic organisms have a KD for xylan of 2 µM and 100 µM, respectively. Binding studies of xylooligosaccharides indicated that these CBMs contain four [1, 2] or five [3] xylose binding sites. Isothermal titration calorimetry showed that ligand binding was enthalpically driven with changes in entropy having a negative impact on affinity. Coverage of polysaccharide ligands at saturation indicated that CBM22 members are endo binding. CBM22 is thus classified as a type B CBM22. 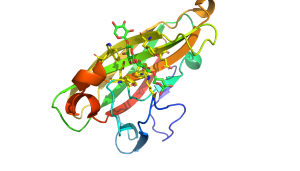 Figure 1. The fold and ligand binding cleft of CBM22-2 from the Paenibacillus barcinonensis xylanase Xyn10C (see PDB ID 4XUR) highlighting the topography of the binding site and the location of key residues in ligand recognition.

The structures of CBM22 members adopt a canonical β-sandwich fold in which the two β-sheets both contain five antiparallel β-strands [1, 3]. One of the β-sheets presents a surface groove that runs along the whole of the concave face of the β-sandwich. This deep cleft is approximately 20 Å long and has a depth of 9 Å in the C-terminal CBM22 (Xyn10B-CBM22-2) in the Clostridium thermocellum xylanase Xyn10B. The dimensions of the cleft corresponds to the length of a xylotetraose moiety and are consistent with biochemical data showing that the ligand binding site interacts with four xylose binding units [1]. The interactions between a CBM22 module and its xylan ligand was revealed by the structure of CBM22-2 (Xyn10C-CBM22-2) from the Paenibacillus barcinonensis xylanase Xyn10C in complex with xylotetraose (Figure 1) [3]. The structure showed that the ligand was in its expected 3-fold helical conformation and that in the centre of the binding site two highly conserved aromatic residues made planar hydrophobic interactions with xylose sugars n and n+1 (i.e. adjacent xylose residues). These apolar interactions were augmented by a limited number of hydrogen bonds with four conserved polar amino acids [3]. Mutagenesis data confirmed the functional importance of these conserved aromatic and polar residues [5]. Several O2 and O3 groups of the xylose residues are solvent exposed explaining why CBM22 members are able to bind to highly decorated xylans such as wheat and rye arabinoxylan. A significant difference between Xyn10C-CBM22-2 and Xyn10B-CBM22-2 is that in the Paenibacillus module an extended loop presents an additional tryptophan that stacks against xylose n+1, which is thus sandwiched between two aromatic residues.

The vast majority of CBM22 members are located in GH10 xylanases. These enzymes often contain multiple copies of CBM22s, and frequently additional CBMs, particularly members of CBM9 [2, 3]. Prior to the discovery of their carbohydrate binding function, CBM22s were defined as X6 modules and were shown to confer substantial an increase in thermostability, which was initially thought to be the major function of these modules [6, 7, 8], and is still thought to be of functional significance [9]. Despite multiple copies of CBM22s in many xylanases there have been no reports of increased affinity through avidity effects [1, 2, 3]. In general the multiple copies of CBM22s in a specific enzyme display similar ligand binding properties [3], although the role, if any, of some members of this family is unknown [10]. Cell labelling studies showed that Xyn10B-CBM22-2 displayed weak binding to plant cell wall sections, possibly reflecting stacking of aromatic residues to the α and β face of the same xylose, which may prevent access to xylans embedded in the complex milieu of the plant cell wall [11]. It was suggested that CBM22s primary targets are soluble xylans [11]. Functional analysis of several multi-modular enzymes led to the proposal that CBM22 members can increase the activity of some xylanases [12, 13].

First Identified
Xyn10B-CBM22-2 [1], the second CBM22 in the Thermotoga maritima GH10 xylanase Xyl10A [2], and the CBM22 in the GH10 xylanase XynA from Caldibaccilus cellulovorans [14] were both shown to bind xylan in early 2000.
First Structural Characterization
The first structural characterization of a CBM22 was the crystal structure of Xyn10B-CBM22-2 [1]. The first structure of a CBM22 in complex with ligand was CBM22-2 from Paenibacillus barcinonensis Xyn10C [3].