Cellulosome complexes are intricate multi-enzyme machines produced by many cellulolytic microorganisms. They are designed for efficient degradation of plant cell wall polysaccharides, notably cellulose — the most abundant organic polymer on Earth. The cellulosome consists of a multi-functional integrating subunit (called scaffoldin), responsible for organizing the various cellulolytic subunits (e.g., the enzymes) into the complex. Within a cellulosome, multiple endoglucanases, cellobiohydrolases, xylanases and other degradative enzymes work synergistically to attack heterogeneous, insoluble cellulose substrates. This is accomplished by the interaction of two complementary classes of module, located on the two separate types of interacting subunits, i.e., a cohesin module on the scaffoldin and a dockerin module on each enzymatic subunit. The high-affinity cohesin-dockerin interaction defines the cellulosome structure. Attachment of the cellulosome to its substrate is mediated by a scaffoldin-borne cellulose-binding module (CBM) that comprises part of the scaffoldin subunit. Much of our understanding of its catalytic components, architecture, and mechanisms of attachment to the bacterial cell and to cellulose, has been derived from the study of Clostridium thermocellum [1, 2, 3, 4].

Early on [8] it became clear that cellulosomes were not restricted to C. thermocellum, but were present in other cellulolytic bacteria. Bacterial cellulosomal systems can be categorized into two major types: simple cellulosome systems contain a single scaffoldin and complex cellulosome systems exhibit multiple types of interacting scaffoldins. The arrangement of the modules on the scaffoldin subunit and the specificity of the cohesin(s) and/or dockerin for their modular counterpart dictate the overall architecture of the cellulosome. Several different types of scaffoldins have been described: the primary scaffoldins incorporate the various dockerin-bearing subunits directly into the cellulosome complex, adaptor scaffoldins increase the repertoire or number of components into the complex, and the anchoring scaffoldins attach the complex to the bacterial cell surface.

Cellulosomes exist as extracellular complexes that are either attached to the cell wall of bacteria or free in solution, where the insoluble substrate can be broken down into soluble products and taken up by the cell. The large size and heterogeneity of cellulosomes from the best-characterized organisms (i.e., C. thermocellum, C. cellulolyticum, and C. cellulovorans) have greatly complicated efforts to probe cellulosome structure and function. Other cellulosome systems (such as those from Acetivibrio cellulolyticus and Ruminococcus flavefaciens) appear to be even more intricate.

Simple Cellulosome Systems In the simple cellulosome systems, the scaffoldins contain a single CBM, one or more X2 modules and numerous (5 to 9) cohesins. These scaffoldins are primary scaffoldins, which incorporate the dockerin-bearing enzymes into the complex. In several cases, the simple cellulosomes have been shown to be associated with the cell surface, but the molecular mechanism responsible for this is still unclear. The X2 module may play a role in attachment to the cell wall. The genes encoding for many important cellulosome subunits are organized in “enzyme-linked gene clusters” on the chromosome. 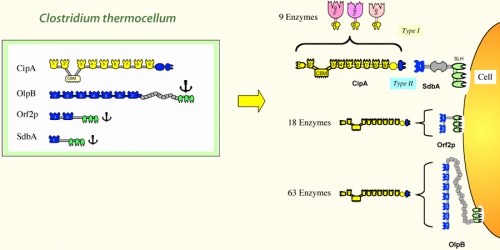 So far, cohesins have been phylogenetically distributed into three groups according to sequence homology; the type-I cohesin, the type-II cohesin and the recently discovered type-III cohesin. The dockerins that interact with each cohesin type are, by definition, of the same type.

One of the greatest efforts in the cellulosome research field is to understand the structure-function relationship in cellulosome assembly. Thus far, crystallographic structures of only selected cohesins have been determined, all of which share the typical jelly-roll topology that forms a flattened 9-stranded beta-sandwich. In addition, crystal structures for type-I and type-II cohesin-dockerin complexes have been described. The structure of a multimodular complex from C. thermocellum was also solved, composed of the type-II cohesin module of the cell surface protein SdbA bound to a trimodular C-terminal fragment of the scaffoldin subunit CipA.

In the early 1980s, Raffi Lamed and Ed Bayer met at Tel Aviv University and commenced their work that led to the discovery of the cellulosome concept. At the time, they weren’t looking for enzymes or cellulosomes at all. They simply sought a ‘cellulose-binding factor’ or ‘CBF’ on the cell surface of the anaerobic thermophilic bacterium, C. thermocellum, which they inferred would account for the observation that the bacterium attaches strongly to the insoluble cellulose substrate prior to its degradation. They employed a then unconventional experimental approach, in which they isolated an adherence-defective mutant of the bacterium and prepared a specific polyclonal antibody for detection of the functional component. Surprisingly, they isolated a very large multi-subunit supramolecular complex, instead of a small protein. A combination of biochemical, biophysical, immunochemical and ultrastructural techniques, followed by molecular biological verification, led to the definition and proof of the cellulosome concept. The birth of the discrete, multi-enzyme cellulosome complex was thus documented.

Additional information is available on the Bayer lab website.