From CAZypedia
(Redirected from GH20)
Jump to: navigation, search

GH20 glycoside hydrolases comprise both eukaryotic and prokaryotic enzymes. In addition to exo-acting β-N-acetylglucosaminidases, β-N-acetylgalactosamindase and β-6-SO3-N-acetylglucosaminidases, GH20 also contains exo-acting lacto-N-biosidases that cleave β-D-Gal-(1→3)-D-GlcNAc disaccharides from the non-reducing end of oligosaccharides. The best known members of GH20 are the human isoenzymes hexosaminidase A (a heterodimer of α and β subunits) and B (a homodimer of β subunits), which are responsible for the hydrolysis of the terminal GalNAc residue from the GM2 ganglioside (GalNAcβ(1–4)-[NANAα(2–3)-]-Galβ(1–4)-Glc-ceramide) within the lysosome. Mutations to these enzymes are responsible for the lysosomal storage disorders Tay-Sachs disease (HEXA) and Sandhoff disease (HEXB). Inhibitors of these enzymes are being developed as chemical chaperones to promote the partial restoration of enzyme activity in vivo and treat these genetic disorders [1].

GM2 ganglioside is the natural target of human hexasaminidase A and B activity.

GH20 enzymes are retaining glycoside hydrolases [2]. Neighboring group participation has long been established as a reasonable mechanism for glycoside hydrolysis in solution[3, 4, 5, 6] and originally outlined as a possible, though subsequently refuted, mechanism for the hen egg-white lysozyme-catalyzed cleavage of β-aryl di-N-acetylchitobiosides [7]. The earliest kinetic evidence supporting a mechanism involving neighboring group participation in an enzyme-catalyzed hydrolysis [8, 9] can be found for an N-acetyl-β-D-glucosaminidase isolated from Aspergillus oryzae [10], likely a GH20 enzyme. This work used free energy relationships to infer neighbouring group participation although complete Michaelis-Menten kinetic parameters were not determined. Such kinetic parameters were determined for a β-N-acetylglucosaminidase from Aspergillus niger and a similar free energy relationship-based analysis carried out to infer neighbouring group participation for this enzyme which, though unknown, is likely from GH20 [11]. The potency of "NAG-thiazoline" as a competitive inhibitor of the jack bean (Canavalia spp) N-acetyl-β-D-hexosaminidase (Ki = 280 nM) has also been used to infer neighboring group participation in the catalytic mechanism although, interestingly, the only retaining hexosaminidases reported currently (November 2010) in the CAZy database for the genus Canavalia are found in GH18 [12].

Deacetylation of the non-reducing end of a series of chito-oligosaccharides results in a loss of activity of Serratia marscescens chitobiase, an established GH20 enzyme, towards these compounds, which instead act as competitive inhibitors [2]. Moreover the structure of Serratia marcescens chitobiase in complex with a substrate provides structural support for a substrate-assisted mechanism.

Competitive Inhibitors of hexosaminidases. "NAG-thiazoline" (upper panel) and non-reducing end deacetylated chito-oligosaccharides are competitive inhibitors of hexosamindase employing neighbouring group participation
A comparative analysis of the activity of Streptomyces plicatus β-hexosaminidase (SpHex, GH20) and Vibrio furnisii β-hexosaminidase (ExoII, GH3) towards p-nitrophenyl N-acyl glucosaminides highlights contrasting reactivity trends expected for families of β-glucosaminidase utilizing a mechanism of substrate-assisted catalysis (GH20) and those which do not (GH3): sharp decreases in activity with increasing N-acyl fluorination are observed in the case of the SpHex enzyme whereas negligible changes in activity are observed for ExoII [13].

The key catalytic residues of GH20 enzymes are found in a conserved D-E amino acid pair. This catalytic diad is preceded in the primary sequence by the consensus H-x-G-G motif. The glutamate residue functions as the catalytic general acid/base. As these enzymes employ neighbouring group participation the preceding aspartate is not a nucleophile. Rather kinetic and crystallographic studies have shown that this residue orients and polarizes the N-acetyl residue [14]. It may function either as a general base by deprotonating the N-acetyl group in the intermediate and forming a neutral oxazoline intermediate, or alternatively it may electrostatically stabilize a positively charge oxazolinium ion intermediate. The N-acetyl group of the substrate is bound in a hydrophobic pocket defined by three conserved tryptophan residues. These three tryptophan residues define a compact pocket which does not accommodate (non-native) extended N-acyl side-chains as readily as the elongated hydrophobic pocket found in GH84 enzymes [15].

The first GH20 enzyme to have its structure determined was the Serratia marscescens chitobiase [16]. This enzyme's active site is located at the C-terminal end of the third of four protein domains, a (βα)8-barrel. On the basis of a structure of this enzyme in complex with the substrate chitobiose, the invariant Glu540 was identified as the likely catalytic general acid/base. Furthermore the N-acetyl group of the non-reducing N-acetylglucosamine residue was found to have its carbonyl oxygen atom suitably positioned to act as the nucleophile [14]. 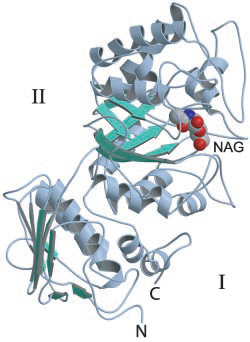 Ribbon diagram of SpHex with "NAG-thiazoline" bound in active site. The catalytic domain II is a (βα)8-barrel.

First sterochemistry determination
The first determination of retaining stereochemistry for a known member of GH20 was on the Serratia marscescens enzyme [2]. The stereochemistry of hydrolysis of three different hexosaminidases (human placenta, jack bean, and bovine kidney) was shown by the Withers group in 1994 [17] and it is now generally assumed that some of these are GH20 enzymes.
First catalytic nucleophile identification
These enzymes employ neighbouring group participation using the substrate N-acetyl group. Prior to the advent of the CAZy system of classification, kinetic studies of the (likely GH20) β-N-hexosaminidases from Aspergillus oryzae [10] and Aspergillus niger [11] supported such a mechanism. This mechanism was suggested by analysis of both the 3-D structure of Serratia marcescens chitobiase [16] (by analogy with GH18 enzymes), through work in which the non-reducing end sugar was de-acetylated resulting in total loss in activity [2], and by potent inhibition of jack bean β-hexosaminidase by NAG-thiazoline [12].
First general acid/base residue identification
Inferred from the 3-D structure [16] and by analogy with structurally related GH18 chitinases.
First 3-D structure
The 3-D structure of the Serratia marscescens chitobiase [16].