From CAZypedia
(Redirected from GH18)
Jump to: navigation, search

Family GH18 is unusual in having glycoside hydrolases that are both catalytically active chitinases (EC 3.2.1.14) and endo-β-N-acetylglucosaminidases (EC 3.2.1.96) and also sub-families of non-hydrolytic proteins that function as carbohydrate binding modules / "lectins" or as xylanase inhibitors.

The active chitinases comprise non-processive endo-acting enzymes as well as processive enzymes with exo- and endo-binding preferences [1, 2]. Most enzymes primarily produce chitobiose, but some endo-acting family 18 chitinases are not capable of cleaving trimers or tetramers and thus yield longer products. Note that in older literature the endo-/exo-character of these enzymes often is assessed by studying the degradation of oligomeric substrates, and that several recent studies have shown this method to be invalid.

Family 18 chitinases break down all forms of chitin at varying rates depending on the enzyme and the substrate. They also act on chitosan with degrees of acetylation as low as 13 % [3] and some are known to degrade peptidoglycan [4]. Studies on family 18 chitinases from Serratia marcescens have suggested that most subsites for sugar binding show some promiscuity with the notable exception of subsite -1 [1].

GH18 enzymes perform enzymic catalysis with retention of anomeric configuration. They belong to a group of enzymes (including GH families 18, 20, 25, 56, 84, and 85) that perform catalysis using a double-displacement reaction but instead of the more common enzyme-derived nucleophile they utilize the N-acetamido carbonyl oxygen in what is termed neighboring group participation (or substrate participation or anchimeric assistance). Figures showing such a mechanism date back to Koshland's 1953 review [5]; indeed they frequent the chemical literature of participating groups long before that, but it is primarily through the work on GH18 [6] and soon after GH20 [7, 8] that such a mechanism became well established. In such a mechanism, which occurs with (net) retention of anomeric configuration, the enzyme provides a general acid function to protonate the leaving group to facilitate its departure with the substrate carbonyl oxygen playing the role of nucleophile to generate a bicyclic "oxazolinium ion" intermediate, which subsequently breaks down following the microscopic reverse via hydrolysis or occasionally transglycosylation). Such a mechanism has a number of facets, one of which is its potential inhibition using thiazolines [9]. Allosamidin, a pseudotrisaccharide consisting of two N-acetylallosamine sugars linked to an allosamizoline moiety [10], is a well known natural compound that is a high affinity inhibitor of family 18 chitinases (see Figure). 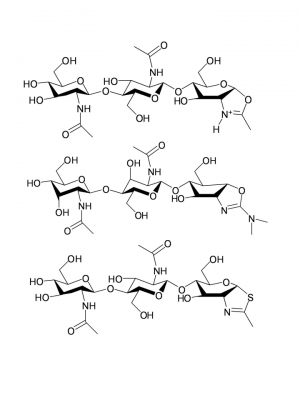 Trisaccharide oxazolinium ion intermediate (upper panel), allosamidin (middle panel), and trisaccharide thiazoline (lower panel).
Like in many other enzymes acting on polysaccharides the substrate-binding clefts of processive family 18 chitinases are lined with aromatic residues. Family 18 chitinases have proven very useful to gain insight into the structural basis of a processive mechanism and in the importance of such a mechanism for biomass-converting efficiency [11, 12]. As previously suggested for cellulases in e.g. [13], aromatic residues close to the catalytic center play a crucial role in processivity [14].

The catalytically-active GH18 enzymes use a double displacement reaction mechanism with neighboring group participation(see Figure). In this mechanism the carbonyl oxygen of the substrate acts as a nucleophile, with assistance from a carboxylate (Asp) that acts to deprotonate the N-acetamido nitrogen during oxazolinium ion formation/breakdown. A second catalytic acid residue (glutamate in family GH18, but often also Asp in other families using this mechanism) acts as a general acid/base to protonate the glycosidic oxygen to assist in the departure of the aglycon, and to deprotonate the nucleophilic water molecule during the hydrolysis of the oxazolinium ion intermediate. In family GH18 the two catalytic carboxylates are found in an D-X-E motif whereas in other families the carboxylates may be adjacent, such as the DD motif in family GH84 (for example see [15]). The physical separation of the two catalytic residues (with the second not in a position to act as a nucleophile itself) has led to confusion in some literature that GH18 and other enzymes (notably GH25) may be inverting enzymes; this is certainly not the case for GH18 and is unlikely to be the case for GH25.

Catalytic mechanism of family 18 chitinases. The picture shows the mechanism proposed for ChiB from Serratia marcescens. Panel c shows the oxazolium ion intermediate which is to be hydrolyzed by an incoming water molecule. The picture is taken from[16].

The D-X-E motif (Asp140-Glu144 in the Figure) is part of a diagnostic D-X-X-D-X-D-X-E motif that includes two more aspartates of which the one in italics (Asp140 in the Figure) is known to be essential for catalytic activity. There are several other conserved residues in the catalytic center that play important roles during catalysis, related to distortion of the -1 sugar, activation of the acetamido group and/or cycling of the pKa of the catalytic glutamate [17]. The O6 of the –1 sugar interacts with the side chain of yet another semi-conserved aspartate (Asp215 in the Figure). In enzymes with an acidic pH optimum this residue is an asparagine.

One unusual of feature of plant members of the GH18 family is the large number of sequences that encode catalytically-inactive proteins that function as enzyme inhibitors or lectins. Phylogenetic analysis of the plant GH18 family reveals clear distinction between hevamine-type chitinases, putative chitinases and narbonins [18]. Out of the major subfamilies, only the one that contains hevamine contains enzymes of demonstrated activity [19]. The subfamily of GH18 that contains xylanase inhibitor proteins (XIP) emerged from the hevamine cluster along with concanavalin B. All have non-conservative substitutions of one of the acidic amino acid residues in the catalytic region. In the structure of concanavalin B the catalytic Glu residue is replaced by Gln [20], which mostly accounts for the lack of chitinase activity reported for this protein. The XIP-type inhibitors all have the third aspartic acid DxxDxDxE mutated into an aromatic residue whereas the catalytic glutamate residue is only conserved in the prototype of cereal xylanase inhibitors, XIP-I (isolated from Triticum aetivum) [21]. In XIP-I and narbonin, the glutamic acid residues are present in an equivalent position to the catalytic residue in hevamine, but their side chain is fully engaged in salt bridges with neighbouring arginine residues [22, 23], preventing chitinase activity despite the presence of the catalytic residue. Furthermore in both XIP-I and narbonin, the position equivalent to residue Asp in hevamine, which has been proposed to stabilize the positively charged oxazolinium ion reaction intermediate [19], is occupied by a bulky residue [22, 23]. The mutation of this Asp residue in alanine in hevamine led to a mutant with approx. 2% residual activity [24]. The most striking disruption of the cleft in XIP-I and narbonin is caused by the mutation of subsite -1 Gly which participates in the hydrogen-bonding network with the ligand [6, 25], resulting in complete obstruction of subsite -1 and preventing access to the catalytic residue [23]. Xylanase inhibitors appeared after the emergence of the various subfamilies of chitinases from their common ancestor. In this respect, the xylanase inhibitors are a relatively new acquisition, and so far no protein has been reported to display both xylanase inhibition and chitinase activities. GH18 XIP-type inhibitors can inhibit xylanases from GH10 and GH11 families [21]. The inhibition specificity of the GH18 xylanase inhibitors can be explained on the basis of the solved 3-D structure of XIP-I in complex with a GH10 xylanase from A. nidulans and a GH11 xylanase from P. funiculosum [26]. 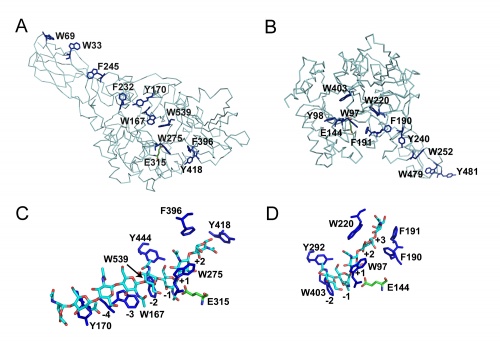 Structures of ChiA (left) and ChiB (right) from Serratia marcescens. Panels A and B show C-alpha traces of the complete two-domain enzymes, with a substrate-binding non-catalytic domain pointing to the upper left (A) or lower right (B). The side chains of aromatic residues (possibly) involved in polysaccharide binding are shown in dark blue, whereas the side chain of the acid/base catalytic glutamate is shown in green. Panel C shows details of ChiA in complex with an chito-octamer (PDB ID1ehn) and panel D shows details of ChiB in complex with a chito-pentamer (PDB ID1e6n). Subsites are numbered. This picture was taken from [12].

Although these enzymes are frequently multi-modular, the catalytic domains are α / β barrels [25, 27]. While several structures for complete bi-modular chitinases are available [27, 28] (see Figure), available structural information for multi-modular enzymes is often limited to the isolated catalytic domain. Work on the conformational itinerary of catalysis which is extremely similar to other retaining enzymes active on gluco-configured substrates, was provided by the van Aalten group [16] in 2001 through the trapping of a distorted Michaelis complex in 1,4B conformation and thus extremely similar to the 1S3 skew boats observed in GH5 [29] for example or the 4E conformation originally seen for a "neighboring group" enzyme in GH20 [7]. More recently, a similar conformation has been observed for the Michaelis complex of another neighboring group enzyme, the GH84 O-GlcNAcase [15]. Fungal GH18 enzymes are considered as possible therapeutic targets and a number of programmes are probing this area (for example [30]).

First sterochemistry determination
Sometimes incorrectly reported as inverting, this family performs catalysis with retention of anomeric configuration as first shown on the Bacillus ciculans enzyme [31].
First catalytic nucleophile identification
This family is one of many that uses neighbouring group participation for catalysis with the N-acetyl carbonyl group acting as the nucleophile; first proposed (we believe) for this family in [6].
First general acid/base residue identification
On the basis of 3-D structure [27].
First 3-D structure
The first two 3-D structures for catalytically active GH18 members were the Serratia marcescens chitinase A and the plant defence protein hevamine published "back-to-back" in Structure in 1994 [25, 27]. In retrospect, however, the non-catalytic "narbonin" structure was arguably the first GH18 3-D structure, although it is has no enzymatic activity [32].