The glycoside hydrolases of this family are α-L-rhamnosidases (EC 3.2.1.40), and is comprised exclusively of bacterial members. The first family GH106 enzyme characterized was Rham from Sphingomonas paucimobilis FP2001. This enzyme showed activity against p-nitrophenyl α-L-rhamnopyranoside [1]. More recently, two Bacteroides thetaiotaomicron enzymes (BT0986 and BT4145) have been characterized. These enzymes are exo-acting targeting linkages present in pectin polysaccharides. BT0986 cleaves the L-Rha-α-1,2-L-Arap linkage in the terminal region of Ccain B of rhamnogalacturonan II [2]. The enzyme BT4145 targets the L-Rha-α-1,4-D-GalA linkage in the backbone of rhamnogalacturonan I [3].

1<NMR experiments showed that GH106 members act by inverting the anomeric configuration of the glycone sugar participating in the scissle glycosidic linkage (inverting mechanism), and thus mediate bond cleave through a single displacement mechanism [3]. Additionally, GH106 enzymes are Ca2+ dependent [2]. Other ion dependent enzyme families are the exo-α-mannosidases GH38, GH47 and GH92. The structure of BT0986 in complex with D-rhamnopyranose-tetrazole indicates that catalysis is proceeds via a B2,5 transition state [2]. 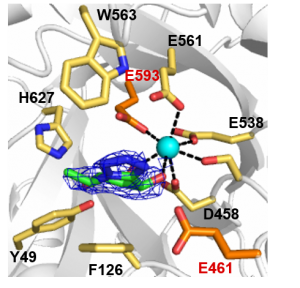 Structural characterization of B. thetaiotaomicron BT0986 identified two carboxylate amino acids (Glu461 and Glu593) that were essential for activity and are highly conserved within GH106 (Figure 1). These glutamates are separated by 8.0 Å, a distance between catalytic residues consistent with an inverting mechanism. Additionally, Glu593, which is 5.8 Å from the anomeric carbon, is ideally positioned to act as general base and Glu461 is the likely general acid as it is within hydrogen bonding distance with the glycosidic oxygen [2]. 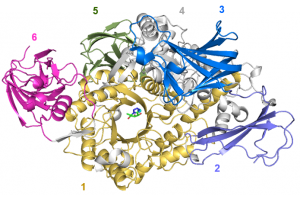 Figure 2. BT0986 structure(5MQN). The figure shows the (β/α)8-barrel domain (1, yellow) and the additional two β-stranded domains (2 to 6). The D-rhamnopyranose tetrazole represented as sticks with carbon in green and the calcium ion (cyan sphere) are shown at the centre of the (β/α)8-barrel.

The three-dimensional structure of B. thetaiotaomicron BT0986 solved using X-ray crystallography represents the first structure of an GH106 enzyme (5MQN). BT0986 displays a N-terminal catalytic domain that presents an (β/α)8-barrel fold with several appended β-stranded domains (C-terminal) (Figure 2) [2]. Calcium makes polar interactions with O2 and O3 of rhamnose (Figure 1) and plays a role in substrate binding and the stabilization of the transition state.