Members of family 158 have been shown to display activity towards β(1,3)-glucans, making this the fourth clan GH-A glycoside hydrolase family known to contain β(1,3)-glucanase activity, alongside GH17, GH128, and GH148. The founding member of this family, Vvad_PD1638 from Victivallis vadensis, was shown to be active on carboxymethyl-curdlan in a high-throughput screen [1].

BuGH158 from the human gut bacterium Bacteroides uniformis was the first GH158 member to receive detailed characterization [2]. BuGH158 is an endo-β(1,3)-glucanase with high specificity towards laminarin from Laminaria digitata, a β(1,3)-glucan with single β(1,6)-glucose branches. BuGH158 is unable to tolerate more extensive branching as evidenced by poor activity towards other β(1,3)-glucans with longer, more frequent branches like laminarin from Eisenia bicyclis and yeast β-glucan [2]. The unbranched, linear β(1,3)-glucan curdlan was also not effectively hydrolyzed by BuGH158, due the poor solubility of this polysaccharide in water (Vvad_PD1638 described above was active on a curdlan that was chemically modified to increase water-solubility [1]).

As a family within clan GH-A, GH158 members were inferred to be retaining enzymes. Retention of anomeric stereochemistry was experimentally confirmed by 1H NMR on the product of hydrolysis of 2-chloro-4-nitrophenyl laminaribioside by BuGH158 [2]. Thus, GH158 members enzymes employ the classical Koshland double-displacement mechanism, which proceeds via a covalent glycosyl-enzyme intermediate.

The catalytic nucleophile and general acid/base residues of BuGH158 were predicted by structural homology with other clan GH-A members to be E220 and E137. The catalytic importance of these residues was subsequently confirmed by site-directed mutagenesis [2]. This glutamate pair is located on loops immediately following β-strands 7 (nucleophile) and 4 (acid/base), consistent with all other clan GH-A enzymes. 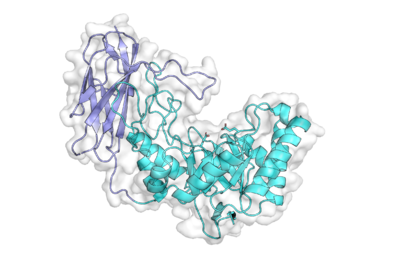 Figure 1. Structure of BuGH158. (PDB ID 6PAL) The TIM barrel domain is shown in cyan, the Ig-like domain in slate, and the catalytic nucleophile and acid/base glutamates are shown as sticks.

The X-ray crystal structure of BuGH158 from Bacteroides uniformis, determined by multi-wavelength anomalous dispersion, represents the founding structural representative of this family [2]. The 1.8 Å-resolution structure revealed a two-domain architecture with an N-terminal (α/β)8 triose phosphate isomerase (TIM) barrel domain (the hallmark of clan GH-A structures) and a C-terminal eight-stranded immunoglobulin (Ig)-like domain that makes extensive contacts with the TIM barrel. A loop from the Ig-like domain extends over the TIM barrel to shape the active site cleft [2].