Glycoside hydrolases of family 19 are endo-acting enzymes that hydrolyze glycosidic bonds within chitin, an insoluble polymer of β-1,4-linked N-acetyl-D-glucosamine (GlcNAc) and are thus referred to as chitinases (EC 3.2.1.14). These enzymes were originally identified in plants. In an older classification system for plant chitinases, comprising both GH18 and GH19 chitinases, family 19 enzymes comprise classes I, II and IV. In 1996, the first bacterial family 19 chitinase was described [1]. In addition to cleaving chitin, GH19 chitinases cleave soluble oligomers of β-1,4-linked N-acetyl-D-glucosamine. For some plant enzymes lysozyme activity has been demonstrated. Currently available data suggest that GH19 enzymes are not particularly effective in degrading crystalline chitin (compared to certain members of the GH18 chitinase family), especially enzymes that lack CBMs. On the other hand GH19 enzymes are highly active on chitosans (= partially deacetylated chitin) with high degrees of acetylation, even if they lack a CBM [2, 3]. Detailed studies on GH19 chitinases from Streptomyces (class IV; [3]) and rice (Oryza sativa; Class I; [4]) have revealed that productive binding requires a GlcNAc to be bound in subsites -2 and +1, whereas deacetylated GlcNAc (GlcN) is tolerated in subsites -1 and +2.

Family 19 enzymes employ an inverting mechanism, as determined by NMR [5] and HPLC analysis[6]. Both structural characteristics (see below) and available biochemical data [3, 4] suggest that GH19 chitinases are non-processive endo-acting enzymes. Kinetic data for the conversion of polymeric and oligomeric substrates have been described in several studies. In some studies, kinetic data have been used to derive subsite binding affinties (e.g. [7, 8]). 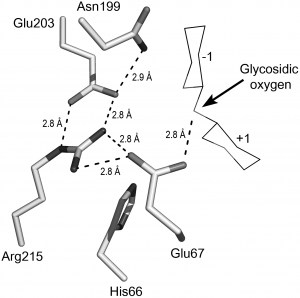 Conserved residues surrounding the catalytic acid, Glu67, in the family 19 papaya chitinase (PDB ID 3cql). Amino acid side chains are shown in stick representation. Hydrogen bonds are shown as dashed lines with distances indicated in Å. A GlcNAc2 unit binding in the -1 and +1 subsites is shown in narrow stick representation and an arrow indicates the position of the glycosidic oxygen. The sugar ring substituents are not shown in order to make the figure clearer. The structure of this complex comes from a model described in reference [9]. The picture is taken from reference [10].

It has been shown that at least two more conserved charged residues are crucial for catalysis. These residues, Glu203 and Arg215 in barley chitinase, form a triad together with the catalytic acid Glu67 [14] (see Figure). Interestingly, a similarly complex electrostatic interaction network is present in family GH46 chitosanases [15, 16] with whom the family 19 enzymes share some overall structural similarity (see below).

The structures of bacterial GH19 chitinases revealed several differences from the previously reported plant structures ([13, 19]; see Figure). Compared to plant enzymes, the bacterial enzymes lack a C-terminal extension and three loops, some of which are thought to be flexible [20, 22].

There is no structural information for GH19 enzymes in complex with their substrate. In 2008, Huet et al published [9] the structure of a complex of papaya family 19 chitinase with GlcNAc units bound in the -2 and +1 subsites. This structure has been used to build a plausible model of a complex with (GlcNAc)4. This is the first structure (half experimental, half modeled) of an enzyme-substrate complex. 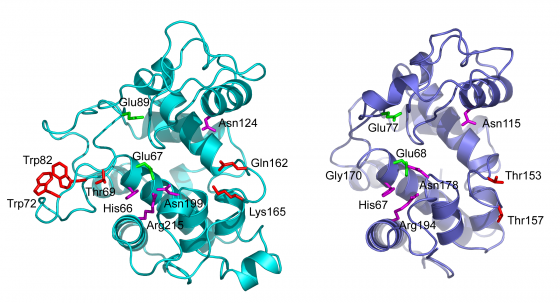 Structures of the barley GH19 chitinase (left; PDB ID 1cns)and ChiG from S. coelicolor (right; PDB ID 2cjl). The side chains of the catalytic acids are shown in green. Additionally, the side chains of several residues that are (putatively) involved in substrate binding and catalysis are shown in red and purple. The picture is taken from reference [13]. 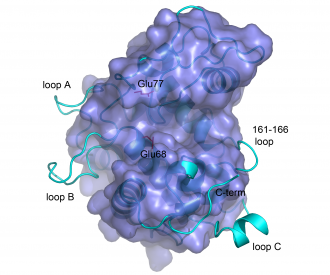 Structural superposition of barley GH19 chitinase (light blue ribbon) and ChiG from S. coelicolor (darker blue surface). The picture highlights structural differences between the enzymes.The side chains of the catalytic glutamates in the bacterial enzymes are shown and labelled. The picture is taken from reference [13].