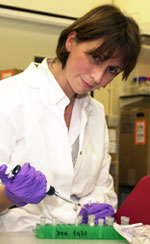 Nathalie Juge started working on carbohydrate-active enzymes during her PhD she obtained in 1993 in Marseille (France) on the structure-function studies of barley alpha-amylases (GH13) (see for example [1]). After two post-doctoral positions in Carlsberg, Copenhagen, Denmark (on EMBO fellowship and EU contract) with Birte Svensson, and a Marie-Curie fellowship at the Institute of Food Research (IFR, Norwich, UK) on glucoamylase (GH15) [2] and starch binding domain (CBM20) [3], she moved back to Marseille as a lecturer in 1997. She then spent several years as visiting scientist at IFR where she coordinated an EU project on glycosidase inhibitors (for a review, see [4]), her Group focusing on xylanases (GH10 & GH11) (see for example [5]) and xylanase inhibitors (GH18) [6, 7] , and supervising a project on human beta-glucosidase (GH1) [8, 9]. She recently joined the Integrated Biology of the Gastrointestinal Tract programme at IFR to lead a Group focusing on the molecular mechanisms underlying bacteria-mucus interactions and the role of protein-glycan interactions in the control of bacterial adhesion ([10]).