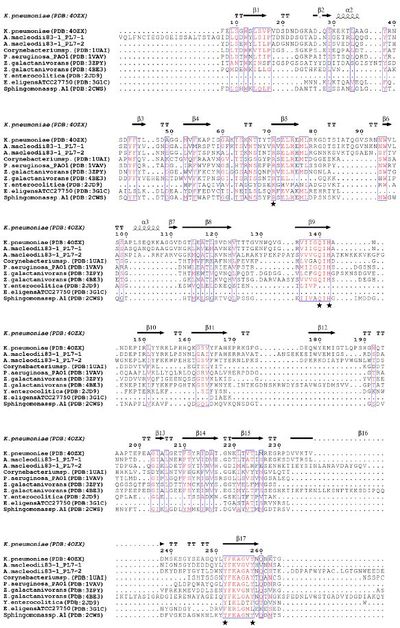 Alginate lyases (Alys) from all families (PL5, PL6, PL7, PL14, PL15, PL17, and PL18), catalyze the depolymerization of alginate in three steps: (I) removal of the negative charge on the carboxylate anion, (II) general base-catalyzed abstraction of the proton on the C5 and (III) β-elimination of the 4-O-glycosidic bond [2]. Most PL7s are endo-active, i.e. acting within a poly- or oligosaccharide and releasing smaller alginate fragments. Some PL7 are exo-acting cleaving a monosaccharide from the non-reducing end of the polymer [3]. In both modes of action, a new non-reducing end with a 4-deoxy-L-erythro-hex-4-en pyranosyl uronate residue (Δ) is formed.

Some marine PL7 alginate lyases require a calcium cation for substrate recognition and binding [3]. Ca2+ is weakening the ionic interactions between substrate (polyanion) and PL7 (polycation) by reducing the surface density of the alginate charge and therefore increasing the enzyme activity [4]. However, there have also been reports of mono- or divalent (metal) cations not increasing or even decreasing enzymatic activity [5, 6]. Therefore, it is not clear if Ca2+ is required for recognition and / or binding of alginate PL7s. Nevertheless, one could speculate if cations like Ca2+ are creating a more accessible form of alginate. In the presence of divalent cations, the confirmation of alginate is changed due to cross linkages with guluronate residues from opposing chains forming a so-called egg box model [7]. Thereby, the 3D confirmation of alginate is changed, forming hydrogels which might be an easier target for the enzyme in the marine environment thanits dissolved form.

Several structural and biochemical analyses of wild type and mutated PL7s revealed five residues forming the active site: arginine (R), glutamine (Q), histidine (H), 2x tyrosine (Y) [8, 9, 10], which are present in three highly conserved regions: R*ELR*ML, VIIGQ(I/V)H, YFKAG*Y*Q respectively (Figure 1) [11]. It has been proposed that in PL7 ALY-1 from Corynebacterium sp. Q117+Y195 interact near the reaction site of alginate to maintain proper orientation of the substrate, R72 interacts with alginate as a base to deprotonate the carboxyl groups at C5 and H119 forming a salt bridge between substrate and enzyme[12]. However, there can also be additional charged residues at the active site, which promote substrate recognition and binding [3]. Such residues can be found in the N-terminal R*ELREML and VIIGQIH regions. Both highly conserved regions are mainly characterized by hydrophobic amino acids (especially aromatic amino acids) such as leucine, tryptophan and methionine as well as residues with planar polar side chains (especially amino acids with charged side chains) such as arginine, glutamic acid, glutamine (Figure 2). These residues have been suggested to be substrate-binding molecules [11]. 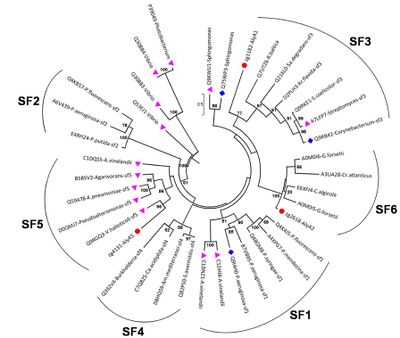 Polysaccharide lyase family 7 (PL7) contains five subfamilies (SF) based on their sequence similarities [13], plus a so far uncharacterized sixth subfamily, which consist only of marine representatives of the Flavobacteriaceae (Figure 2) [3]. The substrate specificity depends on the source of alginate, i.e. derived from brown seaweed or mucoid bacteria Pseudomonas spp. and Azotobacter vinelandii, as well as geographical and seasonal parameters. Alginate is a heteropolysaccharide, consisting of β-D-mannuronate (M) and α-L-guluronate (G). These monosaccharides can occur in homogenous and heterogenous blocks. In addition, bacterial alginate is often acetylated at the C2 and / or C3 of mannuronate, thereby shielding the substrate from degradation. Hence, PL7s can be mannuronate (EC 4.2.2.3), guluronate (EC 4.2.2.11) or mixed link (EC 4.2.2.-) specific lyases. Despite the preference for M- or G-enriched blocks, most PL7 also have a low to moderate activity at the other building block [3, 6, 14]. PolyG specific PL7 have been found in the SF3 and SF5 [3] with QIH in the second highly conserved region, while polyM specific PL7s are characterized by QVH [15, 16].

PL7 displays a jelly roll fold, which is also found in PL14 as well as in glycoside hydrolases of family GH16. Zobellia galactanivorans DsijT possess, among others, two PL7s with different modes of activity [3]. AlyA1 is an endo-acting PL7 belonging to SF3 with a wide open cleft harboring the active site (Figure 3A, B), whereas AlyA5 belongs to SF5 and is exo-active with an active site closed by three loops forming a small pocket (Figure 3C, D). The highly conserved 9-amino-acid-block YFKAGVY*Q (where * is a variable residue) at the C-terminus of PL7s (Figure 2) has also been found for an extracellular pectate lyase (PL1, PDB: 1AIR) in E. chrysanthemi. Alginate and pectate/pectin lyases share the β-elimination mechanism, the recognition of substrates of a similar structure, a Ca2+-binding site and primary sequence similarity, indicating that they probably possess a similar core structural fold probably important to maintain a stable 3D-confirmation [11]. Several alginate lyases have been reported to be multimodular enzymes with putative non-catalytic, carbohydrate-binding modules (CBMs). The first biochemically characterized CBM of an endo PL7 was an N-terminal CBM13 from Agarivorans sp. L11, which increased the substrate binding and therefore catalytic efficiency, influenced substrate specificity, the product profile and thermo stability of the lyase [18]. Opposite observations regarding catalytic efficiency and substrate specificity were made for an endo PL7 from Vibrio splendidus OU02 DNA with an N-terminal CBM32 linked by a unique alpha-helix linker. The CBM and linker were proposed to serve as a "pivot point" somehow just pushing the product profile towards trisaccharides [19]. The PL7 from Persicobacter sp. CCB-QB2 consists of three domains - an N-terminal CBM16 with unknown function, a CBM32 and the C-terminal PL7 [14]. Overall the role of CBMs from different families as part of PL7s still remains unclear. Another common structural feature found in PLs is a number of flexible loops facing above the active site [20], which have been demonstrated to influence substrate recognition, binding [3, 21] and potentially specificity [22].

Alginate degrading organisms often possess specified gene clusters for glycan utilization which contain, among other proteins such as transporters, several endo- and exo-acting Alys of different families. These gene clusters are called polysaccharide utilization loci (PULs) for Bacteriodetes [23] or alginolytic operons in case a SusCD pair transporter is missing or replaced by a different transporter system. It has been shown that these gene clusters can be transferred horizontally from one organism to another and thereby even cross different environmental habitats [24, 25]. The first alginate utilization system (AUS) was found in Zobellia galactinovorans which contains two clusters harboring five out of seven Alys (3x PL7). Those operons originated from an ancestral marine Flavobacterium and were independently transferred to marine Proteobacteria and Japanese gut Bacteriodetes by lateral gene transfer (LGT) [26].

A more detailed studied on horizontal gene transfer of PL7 between marine, ecophysiological different Vibrionaceae isolates revealed rapid adaptation of closely related but speciated bacterial populations, resulting in a fine scale of resource partitioning. The exchange of PL7 between marine microbes drove the evolution of polysaccharide degrading pathways, which might have led to three ecotypes – the pioneers, which degrade the polymer into oligomers, the harvesters (intermediate of the other two types) and the scavengers, which can only utilize very small oligosaccharides created by the pioneers [27].