The AA13 family represents the fourth family of (Lytic) Polysaccharide Monooxygenases (LPMOs / sometimes called PMOs) that has been identified. Found in fungi, the first member of this family to be identified and characterised in the academic literature was isolated from Neurospora crassa by Vu et al [1]. While searching the Neurospora crassa genome for new putative LPMO sequences, they identified a sequence that appeared to code for an LPMO with a C-terminal CBM20 domain but lacked significant overall sequence similarity to other AA9, AA10 or AA11 LPMOs. Subsequently, Lo Leggio et al [2] also identified and characterised AA13 family members from Aspergilllus nidulans and Aspergillus oryzae using a similar approach. Prior to this, genes now known to code for AA13s were demonstrated to produce proteins capable of boosting α and β-amylase activity during starch, amylose and amylopectin degradation (WO2014197705A1).

Of the AA13s that have been biochemically characterised to date, activity has only been demonstrate on starch and related substrates [1, 2]. The expression of these enzymes has also been shown to be heavily unregulated during growth of A. nidulans on starch [3]. As for other LPMOs, AA13s utilise copper and an electron donor to oxidatively introduce chain breaks into the α-1,4-linked glucose polymers that form starch [1, 2]. AA13s specifically attack at the C1 position of the sugar ring forming oligosaccharide products with lactones at the reducing end which are then additionally hydrated to form aldonic acid terminated maltodextrins [2]. The C1 specificity suggests that these LPMOs should be able to oxidatively attack both the α-1,4- and α-1,6-linkages found in amylopectin [4]. Interestingly, AA13s are currently the only LPMOs characterised to date that act on a glucan polymer formed from anything other than β-1,4-linkages [5].

All LPMOs (AA9, AA10, AA11, & AA13) are copper dependent monooxygenases and there is considerable work ongoing in trying to elucidate their detailed reaction mechanism [6]. Starch, being an α-1,4-linked substrate, poses a different challenge for AA13s to be able to oxidatively attack at the C1 carbon. Whether there is a significant difference in mechanism required in order to oxidise starch is currently unclear.

Figure 1. Structure of AA13 from Aspergillus oryzae (PDB ID 4OPB [2]). In the above animation the structure is shown initially in cartoon representation coloured by secondary structure and the transparent surface shown in grey. The active site is shown at the top of the structure with the copper ion shown as a sphere and surrounding active site residues shown as sticks with green carbon atoms. As the animation proceeds the surface surrounding the active site is shown to illustrate the presence of a groove that passes over the active site. This groove is thought to accommodate the helical structure of an α-1,4-linked amylopectin substrate.

Performing kinetic measurements on LPMOs has been notoriously difficult. Several key aspects of AA13 biochemistry have been observed however. The A. nidulans AA13 showed significant synergy with a β-amylase during degradation assays using retrograded starch as the substrate. The combined action of these enzymes resulted in >100-fold increase in the release of maltose compared to β-amylase acting alone, representing one of the most significant boosting activities observed so far for any LPMO [2]. Also highlighted in this study was the importance of the reducing agent used to activate the enzyme with cysteine providing greater activity than ascorbate which is typically used to activate LPMOs. Vu et al [1] also showed that cellobiose dehydrogenase (CDH composed of AA3 and AA8 domains) represents a good activating partner for AA13s as has been observed for AA9s. The importance of the CBM20 module for AA13 activity has also been highlighted. The A. oryzae AA13, which naturally lacks a CBM, did not appear to be active in assays on starch while the CBM20 appended A.nidulans enzyme showed clear activity [2]. Indeed the presence of the CBM20 domain has been demonstrated to confer typical starch and β-cyclodextrin binding properties to AA13s and is suggested to mediate most of the substrate binding properties of this family of enzymes [7]. 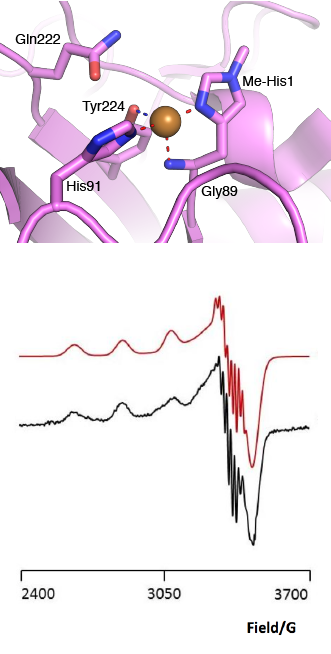 Figure 2. The active site architecture observed for the AA13 from A. oryzae (PDB ID 4OPB [2]). Top: the active site residues surrounding the copper ion are shown. The Cu is shown as a sphere and is in the Cu(I) state due to photo reduction from the X-ray beam. Bottom: EPR spectrum observed for the AA13 from A. oryzae revealing super hyperfine coupling. The raw data are shown in black with the simulated data in red.

The core fold of the AA13 structure is similar to all other LPMOs (AA9, AA10, & AA11) representing a β-sandwich immunoglobulin like fold [2]. There are some significant structural differences compared to the other families however. Firstly, the AA13 structure reveals additional helical secondary structure elements that are not found in other LPMOs (Figure 1). The most prominent difference however is surrounding the copper active site. Where in other LPMOs, the copper histidine brace is found at the centre of a flat or slightly concave surface (AA9, AA10, & AA11), a distinct groove can be observed passing over the active site of AA13 (Figure 1). This is an adaptation that is thought to be necessary to accommodate the helical structure of an amylopectin substrate. Despite significant efforts, it has not been possible to determine an oligosaccharide bound structure for an AA13 which would be particularly beneficial to delineating the adaptions necessary to allow activity on an α-1,4-linked substrate [8].

The “histidine brace” motif is used to bind the active site copper in AA13 [2], as it is for all other LPMOs studied to date (AA9, AA10 & AA11) [9]. This motif sees the amino group and imidazole side chain of the N-terminal histidine, together with the imidazole group of a second histidine, directly coordinate the copper ion in a T-shaped geometry. For AA13s, one axial position is occupied by a tyrosine on one side of the copper ion, with a loop containing a glycine approaching near to the copper on the other side (Figure 2, top) [2]. In AA10s and AA11s alanine in this position has been suggested as a possible important factor in distorting the arrangement of water molecules around the active site which may have mechanistic consequences in these families [10, 11]. An interesting feature of the electron paramagnetic resonance (EPR) spectrum observed for the A. nidulans and A. oryzae AA13s was the presence of superhyperfine coupling in the spectrum (Figure 2, bottom) [2].